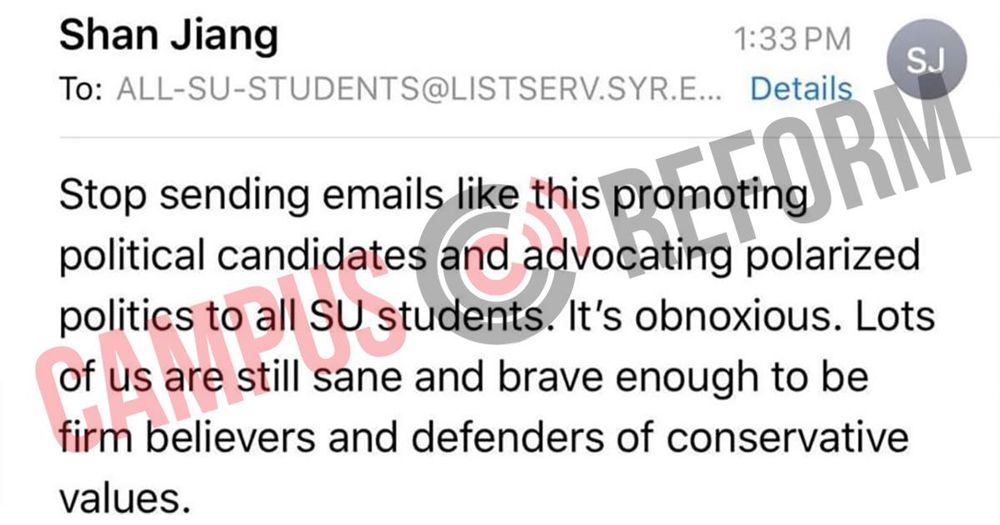 “Tonight we will be voting as an organization to endorse congressional candidate Dana Balter,” asserted the email, which was sent to all of the more than 22,000 students enrolled at the university. “Since we do not require attendance at any of our meetings, we will not be requiring a quorum for tonight’s vote. Only members in attendance will have a say.”

According to Syracuse.com, Balter is currently a visiting assistant teaching professor at Syracuse University’s Maxwell School of Citizenship and Public Affairs, and describes herself as a “pragmatic progressive” who supported Hillary Clinton in 2016, but also liked Bernie Sanders.

The missive evoked strong backlash from conservative students, several of whom replied by rebuking the College Democrats for the entire student body to see.

“Go to the meeting and have your say. Bring your friends. They haven’t promoted her yet,” suggested Liam Michael Mcmonagle, copying the entire school. “Please nobody else respond to this email. It’s literally the entire school.”

“Stop sending emails like this promoting political candidates and advocating polarized politics to all SU students. Its obnoxious,” declared Shan Jiang, a student at Syracuse. “Lots of us are still sane and brave enough to be firm believers and defenders of conservative values.”

This remark apparently offended another student, Tyler Alan Smart, who responded by saying, “Please do not associate mental illnesses with those who do not believe in conservative political values.”

[RELATED: Duke prof suggests libertarians are ‘on the autism spectrum’]

Not long after the College Democrats email went out, the university itself entered the conversation, sending yet another campus-wide email informing the school community that the original email was a violation of school policy.

“Many in our campus community incorrectly interpreted the email to mean the student body was collectively endorsing a candidate,” the university added. “This was not the case, nor the intention of the sender, and is an illustration why we have policies governing such activities.”

After further clarifying that Syracuse studiously abstains from engaging in any form of partisan political activity, however, the administration turned its attention to the replies provoked by the original email, lamenting that “Regretfully, because this email was distributed to the entire student body, several additional emails were exchanged, some of which were disrespectful and offensive in nature.”