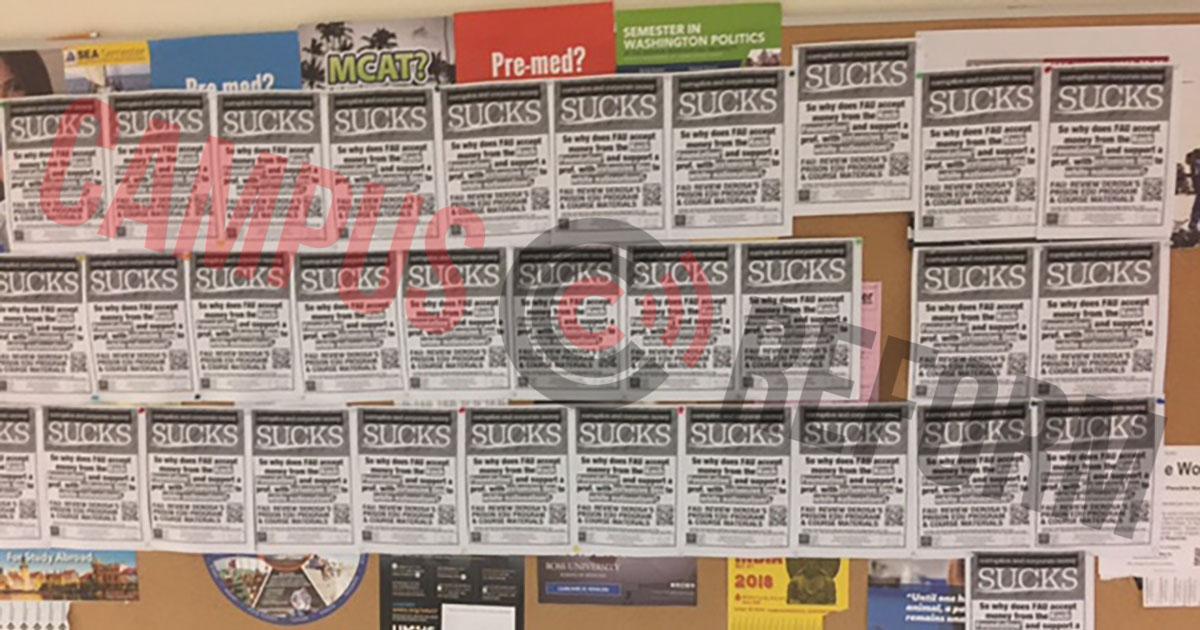 The campaign against Florida Atlantic University professor Dr. Marshall DeRosa continues, with new posters approved by the university, and a petition calling for FAU to review his fitness as a professor.

DeRosa has been under fire since March, when anonymous flyers began appearing on campus declaring that he is “a white supremacist.”

"The charge of being a ‘white supremacist’ that's been leveled against DeRosa is supposedly justified on several grounds, all equally specious."

Recently, new posters have surfaced on campus accusing DeRosa of having “extensive ties to White Nationalism” and calling on the university to “review DeRosa’s prison edu program and course materials.”

These posters, unlike the previous ones, include a stamp of approval by FAU’s “Student Involvement & Leadership” department.

The posters focus on DeRosa’s alleged ties to a group called the “League of the South,” as well as the Koch Foundation, in an effort to incite outrage against him.

In a recent interview with The Nation, however, DeRosa explained that while he had previously been a faculty member with the League of the South Institute, he cut ties with the group as it became more extremist and took on racist overtones. DeRosa is on record as disassociating with the group for this reason.

"They’d invite me to things and I’d go to talk about my scholarship, especially the Confederate constitution, but I got an inkling as to some of the characters involved," DeRosa said, adding, "I didn’t feel comfortable."

According to FAU’s policy, approved posters “may only be placed on approved bulletin boards. Flyers may not be put on vending machines, vehicles, floors, windows, doors, glass surfaces, the sides of buildings, exterior walls, any interior walls, trees, shrubbery, or any plants.”

However, DeRosa told Campus Reform that he discovered the flyers plastered around a classroom in which he was proctoring a final exam.

Campus Reform reached out to FAU administration multiple times for information regarding approval of the flyers, but received no response from any of the individuals or departments contacted.

This does not represent the first time that the protesters have confronted DeRosa directly. Last month, shortly after the original flyers appeared, students showed up uninvited at a faculty meetings to repeat their accusations in person.

Most recently, a group called “UnKoch My Campus,” which describes itself as “a cooperative campaign to expose and expel undue donor influence in academia,” has begun circulating a petition encouraging FAU students to “demand that the university take action” against DeRosa.

While the petition does not include much in the way of specifics, it does link to a document put out by UnKoch My Campus that focuses largely on DeRosa.

The executive summary begins by complaining that “DeRosa’s Inmate Civics Education Enhancement Project (ICEEP) program at Florida Atlantic University, funded by the Charles Koch Foundation and (private prison) GEO Group, aims to ‘change the culture within the prison and prepare inmates for their return into society.’”

This is problematic, the group says, because the program has inmates read a book called The Five Thousand Year Leap: 28 Great Ideas That Changed the World, which it refers to as “the ‘handbook’ of the (Koch-instigated) Tea Party movement.”

According to DeRosa, however, “The foci of the program are individual responsibility, free markets, rights/duties, dignity of the individual, and LIBERTY.”

The document also criticizes DeRosa for serving on “the research advisory council of Florida’s premier Koch-funded think tank, the James Madison Institute,” as well as for his affiliation with the Ludwig von Mises Institute, which it calls “the nation’s premier neo-confederate think tank.”

According to conservative academic and philosopher Paul Gottfried, the students attacking DeRosa are not “snowflakes,” but rather “dangerous thought police, who in this case have targeted a thoroughly decent teacher.”

“The charge of being a ‘white supremacist’ that's been leveled against DeRosa is supposedly justified on several grounds, all equally specious,” Gottfried asserts in an op-ed for The American Thinker. “One, although he's given his time and energy sacrificially to teaching prisoners and preparing them for life after prison, he's done this with money from a Republican source.”

“Never mind that there's zero evidence that the Koch Foundation has ever advocated for a single racist position or that it's even particularly conservative on social questions,” Gottfried continues, referencing a Politico report that details an “uneasy” relationship between the Koch brothers and the Trump administration.

“But that's not how the thought police (not snowflakes) at Florida Atlantic and Wake Forest think,” he continues. “The Koch brothers generally support the GOP and therefore must be racist, as the left now defines that term.”

“A large percentage of the prisoners whom DeRosa has argued for happen to be black,” Gottfried observes, “and it is ridiculous to claim that his use of a Koch grant has gone toward advancing white supremacist ideology.”