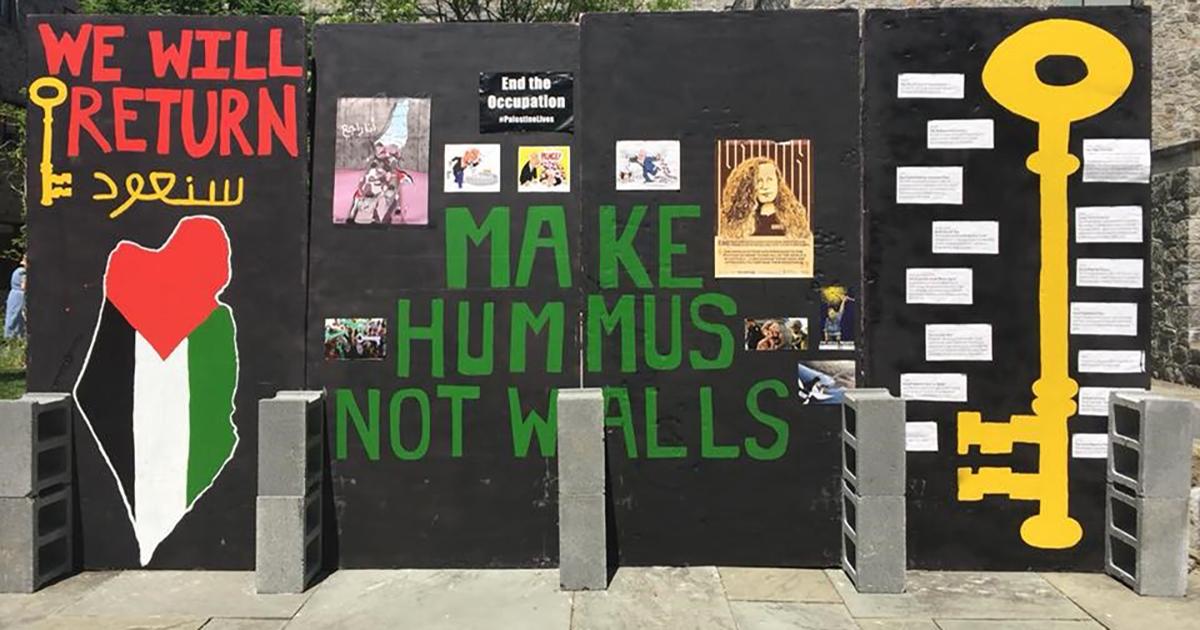 The Students for Justice Palestine (SJP) chapter at Swarthmore College has created a “mock apartheid wall” after the college rejected its demand for a campus-wide ban on Sabra hummus.

As Campus Reform previously reported, Swarthmore President Valerie Smith recently sent an email informing students that the school would not be ending the sale of Sabra hummus on campus, as SJP had demanded, but will rather provide an alternative Hummus brand.

"By continuing to sell Sabra products, Swarthmore is an accessory to the occupation, and all of us here are complicit to the violence in that system."

SJP had petitioned Smith to ban Sabra hummus from campus because of the company’s ties to Israel, specifically complaining that Sabra’s parent company allegedly sends “care packages” to an Israeli military unit.

To protest Smith’s decision, the SJP chapter set up a “mock apartheid wall” on campus comparing the Israel-Palestine conflict to South African Apartheid.

The wall was erected outside of a classroom building, and includes various slogans, the most prominent of which is “Make Hummus Not Walls.”

The wall also features more explicitly pro-Palestine messages, such as “End the Occupation” and “We Will Return,” which is written above an outline of the Israeli state filled in with the Palestinian flag.

A video posted to Facebook gives SJP’s reaction to Smith’s email, with one student declaring that “all of us are complicit to the violence” because Swarthmore continues to sell Hummus.

“President Smith’s email is nothing more than empty words,” the student complained, “and by continuing to sell Sabra products, Swarthmore is an accessory to the occupation, and all of us here are complicit to the violence in that system, and we need to end that.”

According to a Facebook event page, SJP is planning tear down the wall Thursday at 8:30 p.m. in a “symbolic act of resistance.”

Matthew Stein, president of Swarthmore Students for Israel and a Campus Reform Campus Correspondent, said the wall is highly problematic, describing it as an attempt to demonize Israel.

“This is certainly a call to destroy Israel, as shown by their map of the land, covered entirely by a Palestinian flag,” Stein told Campus Reform.

Stein also asserted that the display is “beyond stepping over the line,” accusing SJP of being “dishonest” by labeling the recent protests in Gaza as “non-violent” when there have been multiple acts of violence during the protests.

Swarthmore College referred Campus Reform to its original statement rejecting the ban on Sabra hummus, but SJP did not respond to requests for comment.