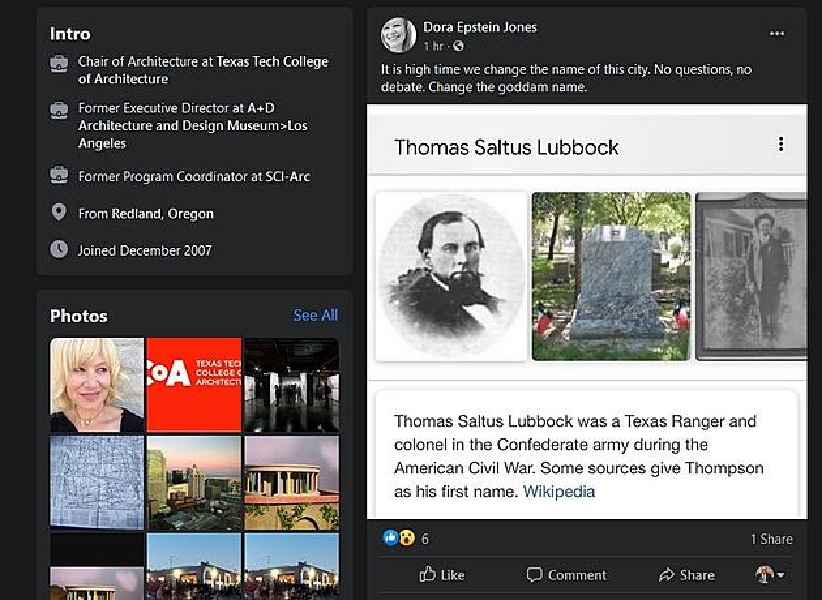 A Texas Tech University professor has called for the city of Lubbock, Texas to change its name because of its ties to the confederacy.

Dora Epstein Jones, associate professor and chair of the College of Architecture at Texas Tech University in Lubbock, wrote on social media "it is high time we changed the name of this city. No questions, no debate. Change the goddamn name,” she wrote.

"it is high time we changed the name of this city. No questions, no debate"

Epstein Jones could not be reached for further comment.

The city is located in Lubbock County, which was named for Thomas Saltus Lubbock, a former Texas Ranger and an officer in the confederate army. Thomas Lubbock's brother, Francis Lubbock, a Democrat, was the governor of Texas, a slave state, during the Civil War.

Around the U.S., efforts to remove reminders of the former confederacy have been renewed, including the destruction of monuments on and near university campuses.  A movement to rename buildings and institutions has also gained traction in recent weeks; colleges have changed the names of some of their campus buildings, including Clemson University, which recently removed John C. Calhoun’s name from its Honors College and has been asked to consider rename Clemson University, named for the former confederate army officer, Thomas Greene Clemson.

Epstein Jones has now taken these calls one step further by suggesting that the name of an entire city, and county, be changed.

Protests have also rekindled controversy over whether ten U.S. military bases should continue to carry the names of confederate figures. One of those bases, Fort Hood, is in Texas. Earlier this year, the Army announced that it would not rename facilities.

"It is important to note that the naming of installations and streets was done in a spirit of reconciliation, not to demonstrate support for any particular cause or ideology," an Army spokesperson told Task & Purpose in February. "The Army has a tradition of naming installations and streets after historical figures of military significance, including former Union and Confederate general officers."

But the Army has recently reversed its stance on the issue. According to Politico, an Army spokesman said that "the Secretary of Defense and Secretary of the Army are open to a bi-partisan discussion” on the subject of changing the names of bases inspired by Confederate leaders.

President Donald Trump on Twitter, however, asserted that his administration “will not even consider” renaming the bases.