This comes after a student journalist was removed from the student radio station for suggesting there may be "more" to the Jacob Blake story.

A student senator at Arizona State University recently tweeted about her happiness at the possibility of a police officer being in danger.

She was subsequently removed from her position at the student newspaper. 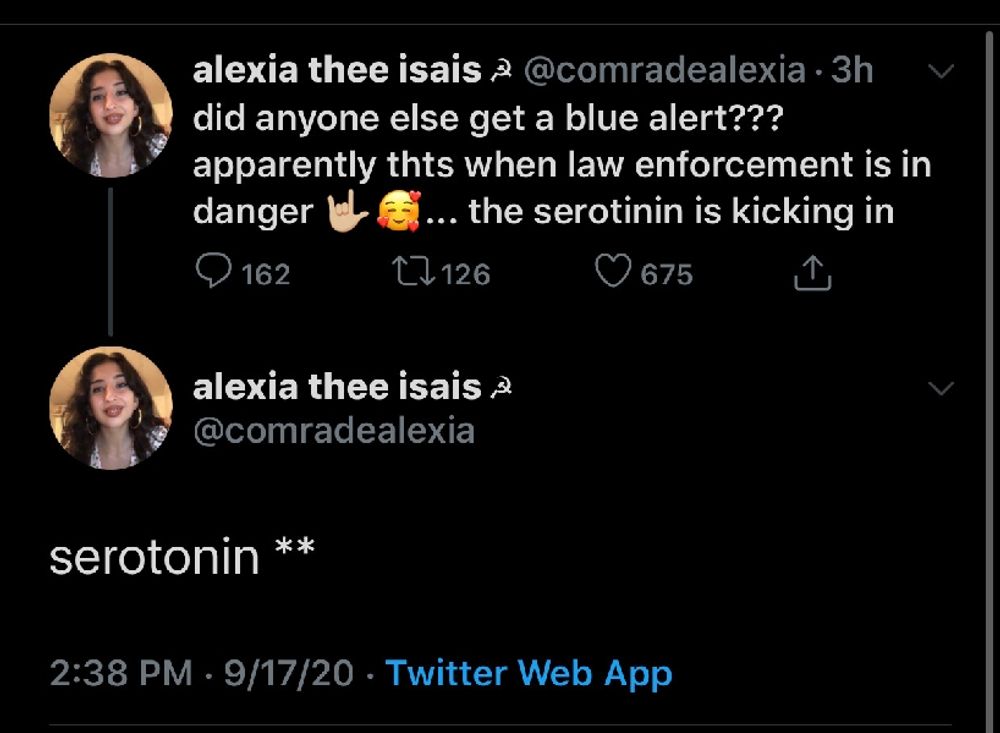 A student senator at Arizona State University has been fired from her university’s school newspaper due to her controversial statements about law enforcement. The student government is silent about her actions.

Student Senator Alexia Isais, a self proclaimed “Marixst-Leninist,” makes statements on Twitter expressing her fondness of communism and contempt for America. Campus Reform previously reported on several of Isais’ tweets that praised the Chinese Communist Party and wished “death to America.”

Isais is a student senator representing the College of Liberal Arts and Sciences in the Undergraduate Student Government’s Senate at Arizona State University. She is the chair of Students for Socialism ASU and also belongs to the Party for Socialism and Liberation. a Marxist-Leninist political organization. Isais was also a columnist for ASU’s student-run newspaper The State Press.

An alert was issued in Arizona following a shooting of an Arizona state trooper in Phoenix by a seventeen-year-old, according to AZCentral. Isais took to Twitter to respond to the alert that came to her phone.

“Did anyone else get a blue alert??? Apparently thts [sic] when law enforcement is in danger []...the serotinin [sic] is kicking in," wrote Isais.

In a follow-up tweet that has since been deleted, Isais said, “Sorry but police aren’t actually human. They can all go fall into the abyss and society would be better without them.”

The State Press decided to remove Isais from her role as an opinion columnist following the tweets. The student news organization issued a Letter from the Editors to explain its decision.

The decision to dismiss Isais was not because her tweets had an anti-cop sentiment, but rather because her “tweets promoted violence or harm toward a person.”

“Another major factor behind the decision was because having those original tweets out in public, on behalf of The State Press — which was tagged in her bio — can endanger our staff and newspaper as a whole,” the letter stated.

The editors made it clear in the letter that Isais’ removal had nothing to do with her political views as they defended many of her opinion columns “which were subject to scrutiny and controversy.” The editors made the decision in order to “uphold our organization’s standards” and “protecting our staff from outside harm.”

“Two things can be true at once: You can support the Black Lives Matter movement and believe that there needs to be major police reform or abolition while simultaneously condemning the celebration or encouragement of violence publicly while representing a news organization,” the editors said.

Isais has previously taken to Twitter to attack law enforcement, saying “If you say back the blue then you might as well say you support the lynching of BIPOC students.”

Campus Reform asked Isais if her viewpoint has changed since The State Press took this action against her. In response, Isais said, “I stand by my anti police sentiment.”

[RELATED:ASU student gov sends out 'list of ways to help the BLM movement']

Isais is the second member of ASU student media to face consequences for statements made on social media. Campus Reform reported on the backlash ASU student radio manager Rae’Lee Klein faced from Blaze Radio, a student-run AM radio station, for a tweet about the shooting of Jacob Blake.

Following the altercation, Klein posted a New York Post article detailing the sexual assault charges against Blake with a caption reading, “Always more to the story, folks. Please read this article to get the background of Jacob Blake’s warrant. You’ll be quite disgusted.”

The board of directors unanimously agreed to remove Klein, but Klein told Campus Reform that she did “not intend on stepping down in any way.” However, Klein posted on Twitter that “it was made perfectly clear to [her] and the station that [she has] been removed from [her] position.”

According to the State Press’ Letter from the Editors regarding Isais’ dismissal, students were comparing her firing to Klein’s. The editors refuted the comparison by stating, “Students at Blaze Radio did not have the authority to fire Klein, whereas student leaders at The State Press do have that power.”

Klein corroborated this claim when she told Campus Reform, “State Press is different than Blaze in that they’ve set their organization up to be completely separate from the school. They hire, fire, pay, etc. all in house. Whereas Blaze is all controlled by the school.”

The editors went on to say that had Klein worked at The State Press, she would have been fired for her tweet just as Isais was.

When asked about her situation compared to Isais’, Klein said, “Even though we have completely different views, I still think she deserves due process and a hearing in her removal. Her 1st Amendment rights should be just as protected as any other students. I actually reached out to her just to let her know she had a friend, but never heard back.”

Klein is now suing the school for violating her first amendment rights.

“Both Klein and Isais feel that their First Amendment rights were violated. The First Amendment does not protect you from the consequences of your words. Simply put, the decision to remove Alexia Isais from her position was not an effort to violate her First Amendment right, nor silence her voice as a woman of color”- The State Press editors wrote- “We believe that this incident crossed a line and, as a newsroom, we have standards that we must uphold.”

Isais has since decided to delete the tweets that caused her dismissal. "Sometimes I say things from a very passionate perspective. I do realize that it was a bit of a unnecessary thing to say at the moment," Isais told The Arizona Republic.

ASU student government did not respond to Campus Reform’s request for comment. The State Press declined to comment further.