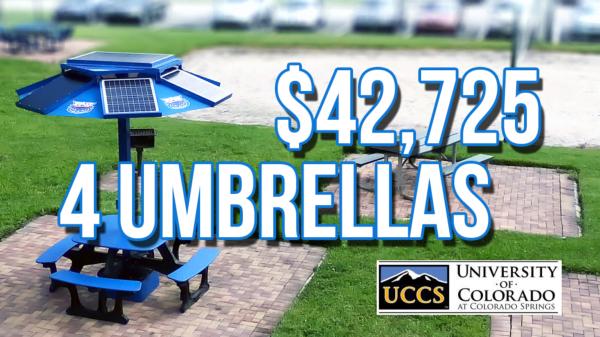 The student government at the University of Colorado - Colorado Springs (UCCS) is set to spend $42,725 of student funds on four solar powered umbrellas which will feature sockets which will allow students to charge their mobile devices using only the sun’s power.

The umbrellas are set to cost $9,795 apiece, according to The Scribe, a student publication at UCCS, and will be paid for out of the school’s Green Action Fund (GAF), an account that is filled with a $5 mandatory “Solar Fee” each student must pay each semester.

“The energy saved will be more negligible.”

Those four umbrellas, which are being manufactured by Solar Dok, a Michigan based provider of green energy, will consume about 40 percent of the school’s green fund for the year.

Future cost and energy savings from the umbrellas at this point remain unclear according to Matthew Driftmier, the UCCS student government senator of Sustainability and member of the GAF committee who originally planned for the umbrellas' purchase.

“There aren’t really hard statistics about how much energy is saved because it’s dependent on how much use they get, how much people are actually using them,” said Driftmier, according to The Scribe.

“This isn't going to be cutting the UC's energy bills in half by a long shot,” he acknowledged. “The energy saved will be more negligible.”

Not every student at UCCS, however, is convinced the the elaborate umbrellas justify their $40k cost, or the $10 fee students must pay into the fund each year.

Tyler Whittemore, a senior majoring in strategic and organizational communication, told Campus Reform on Tuesday that he considers the purchase a foolish investment.

"Forty-one thousand dollars for four picnic tables – that go out of commission in the winter – hardly seems worth the negligible energy savings and proposed sustainability awareness," he said.

"Being environmentally aware is high on the list of priorities for UCCS students and faculty,” said Melanie Whitcomb, another student who is a junior, majoring in marketing and communication.

“These tables, solar panels and charging stations, while fun and engaging, are not truly a cost cutting measure or high in energy saving,” she added.

On promotional video, UCCS’s Green Action Fund, describes itself as “really the only committee or fee that students pay where students actually have a voice in how that money is used on a regular basis.”

The project currently has verbal approval from facilities, auxiliaries, the university architect and the UC design review board.

Similar panels have been installed nationwide at nearly 20 universities including Texas A&M, UCLA and the University of Wisconsin.