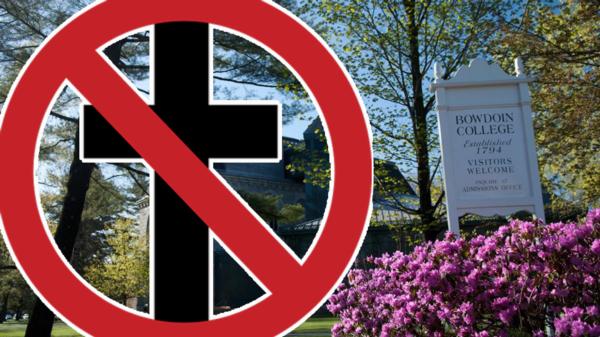 In an apparent effort to protect students from discrimination, two volunteer Christian ministers have been expelled from the Bowdoin College campus for declining to sign a campus-wide policy that purportedly violates their religious beliefs.

Rob and Sim Gregory have served as the volunteer advisors to the Bowdoin Christian Fellowship (BCF) in Brunswick, Maine, for almost a decade but will step down at the end of the year after the school banned the couple from continuing their leadership roles. The decision came after the couple refused to sign the College’s Volunteer Agreement form because it violated their religious beliefs.

“My suspicion is that the Penn State considerations were not involved since my wife and I have been on campus for almost a decade." - Rob Gregory

“The school presented us with a packet of requirements to submit to campus policies on all matters, including the selection of leaders in the Christian organization,” Rob Gregory told Campus Reform.

The husband and wife duo are volunteers with InterVarsity Christian Fellowship/USA, an evangelical campus ministry organization that focuses on Bible studies and witness training. BCF is a student group affiliated with the ministry that, according to Gregory, selects their leaders based on governing Christian principles.

The volunteer agreement, introduced during the fall semester, subjects all college volunteers to submit to background checks and comply with all of the college’s policies. This includes the school’s non-discrimination policy, which prohibits the college from discriminating on the basis of categories including sexual orientation and religion.

Tim Foster, the Dean of Student Affairs, told the Bowdoin Orient, the official campus newspaper, that the initiative was in part due to Penn State’s 2011 scandal in which assistant football coach Jerry Sandusky was convicted of multiple counts of child molestation.

“One of the things we realized,” Foster told the Orient, “is that we have people on our campus working with students, spending a significant amount of time with students, and we don’t know a lot about a lot of these people.”

But Gregory, who is a local lawyer, doesn’t buy that claim.

“My suspicion is that the Penn State considerations were not involved since my wife and I have been on campus for almost a decade,” he told Campus Reform. “We’re pretty well known there.”

Despite filing a Reservation of Rights to Religious Beliefs and Practices request, a request for exemption based on religious beliefs, and offering to undergo any background checks necessary, the Gregorys’ appeal was still denied by Foster. Gregory said Bowdoin declined to offer an alternative solution, either.

The only certainty for the Gregorys is that they will not be given a place on campus to continue their ministry, but as for what’s next for the husband and wife team, it’s up in the air.

“It does look like our presence on campus going forward would only be on invitation and the conditions for extending an invitation are unclear,” Gregory said.

The pair has entertained the possibility of holding an off-campus Bible study, but Gregory said there’s still a lot to consider.

“When you’re doing campus ministry, you don’t make decisions by yourself,” he said, mentioning that their focus is on the students and their needs.

According to the Bowdoin Orient, both the advisors of the Catholic and Muslim organizations have signed the volunteer agreement without requesting any religious exemption.

Bowdoin College did not respond to multiple requests for comment from Campus Reform.