Boise State professor mockingly asks: 'When may I shoot a student?' 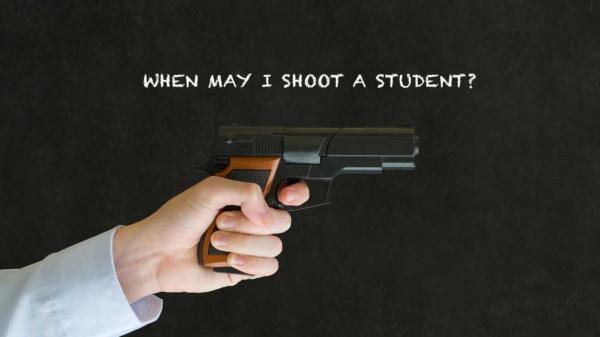 Proposed legislation that would allow guns on Idaho campuses has left one professor sarcastically plotting situations in which he should shoot students.

Greg Hampikian, a biology and criminal justice professor at Boise State University, took to the New York Times editorial page this week to voice his exaggerated concerns of just what life would look like if guns were allowed on campus, painting a picture of Boise State as Dodge City.

"I am sure that it has not escaped your attention that the library would make an excellent shooting range, and the bookstore could do with fewer books and more ammo choices." - Boise State professor Greg Hampikian

“[N]ow that we’ll all be packing heat, I would like legal instruction in the rules of classroom engagement,” he says, noting that he wants to be informed "which infractions may be treated as de facto capital crimes."

“I assume that if a student shoots first, I am allowed to empty my clip; but given the velocity of firearms, and my aging reflexes, I’d like to be proactive,” Hampikian wrote. “For example, if I am working out a long equation on the board and several students try to correct me using their laser sights, am I allowed to fire a warning shot?”

Idaho’s House of Representatives is poised to pass the legislation which the Senate approved earlier this month allowing concealed carry permit holders to bring their guns onto public university and college campuses. Six other states similarly allow concealed carry on public universities, such as neighboring Utah, which apparently has not experienced any additional problems on college campuses in the state.

“We have had no incidents on campus regarding this law,” University of Utah spokeswoman Maria O’Mara told IdahoReporter.com.

However, Hampikian makes it clear in his editorial, titled "When May I shoot a Student?", that he has no faith in the responsibility of Boise State’s students. He writes that allowing guns on campus would heighten the antics of “drunken frat boys” from simply urinating against a building to “firing a few rounds into a sorority house”—both of which he deems would be “violations of the same honor code.”

“My current students have grown up learning responsible weapon use through virtual training available on the Xbox and PlayStation. Far from being enamored of violence, many studies have shown they are numb to it,” wrote Hampikian.

“These creative young minds will certainly be stimulated by access to more technology at the university, items like autoloaders, silencers and hollow points. I am sure that it has not escaped your attention that the library would make an excellent shooting range, and the bookstore could do with fewer books and more ammo choices.”