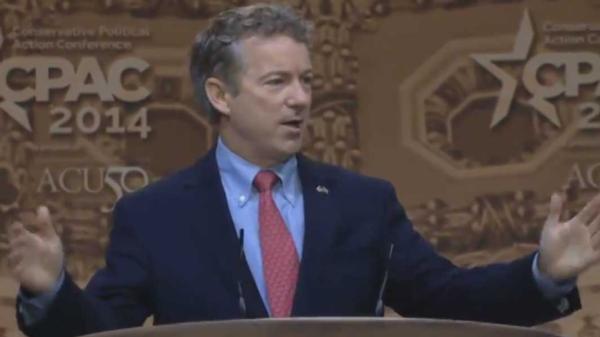 From stickers embellishing nametags to bright red signs toted around by gaggles of Young Americans for Liberty students, there’s no doubt that college students who claimed to “Stand with Rand” a year ago at the annual Conservative Political Action Conference still adore the junior Kentucky senator—and his policies.

Met with rapturous cheers from the crowd gathered at the Gaylord Hotel in National Harbor, Md., Sen. Rand Paul strayed from the foreign policy rhetoric that had previously been prevalent at the conference and condemned both the National Security Agency for its spying practices and President Barack Obama for his failure to adequately “protect the rights” of American citizens.

“I believe that what you do on your cell phone is none of their damn business,” Paul said to an overcrowded ballroom, evoking the loudest applause of this year’s conference yet.

And while Fourth Amendment issues may not be the most obvious of issues for college students to unite behind, Paul’s charismatic and seemingly laid back personality—he showed up to CPAC in jeans and boots—has reeled students in, hook, line and sinker.

“Will you, America’s next generation of liberty lovers, will you stand and be heard?” Paul asked his idolizing audience.

And the liberty lovers obliged. Throughout his brief speech, chants of “President Paul” erupted from the young people standing in the back of the room and rogue attendees raised their “Stand with Rand” signs above their heads — signs that conference employees had attempted to confiscate at the ballroom’s entrance prior to Paul taking the stage.

And standing with Rand is the Republican candidate for U.S. Senate in North Carolina, Greg Brannon, who threw a timely fundraiser immediately after Paul’s speech a few blocks away at McCormick & Schmick’s seafood restaurant. With Paul headlining the fundraiser, the secluded room at the back of the restaurant was crowded and loud.

Standing amid swarms of supporters and caterers with trays of sushi, Brannon reiterated Paul’s denouncement of the NSA to Campus Reform, slamming the government agency for its lack of constitutionality, lack of adherence to the Fourth Amendment, and partnering with universities for internship programs.

Jacob Pritchett, an ASU sophomore, agrees. The 20-year-old is helping to lead the petition at his university to stop its partnership with the NSA.

According to Pritchett, the prestige that comes with having the NSA on the school’s pedigree isn’t enough.

“ASU shouldn’t be complicit in the efforts to take rights away from its students,” Pritchett told Campus Reform. “ASU’s job is to find programs to get financial support and prestige, but they should not be selling out students in the process.”

It seems Pritchett isn’t alone in his thinking; 500 others have signed onto a Change.org petition he intends to submit to the university. Pritchett is hopeful that the number of signatures continues to grow, adding that he’s encouraged to see not only students signing the petition, but also citizens all across Arizona.

“While activities in partnership with the NSA on the ASU campus likely don’t directly violate the Constitution, by supporting this organization and taking money from it, we become complicit in its illegal activities,” says an open letter to ASU President Michael Crow. “ASU should not support or associate with an agency violating its own students’ rights.”

ASU did not respond to multiple requests for comment in time for publication.