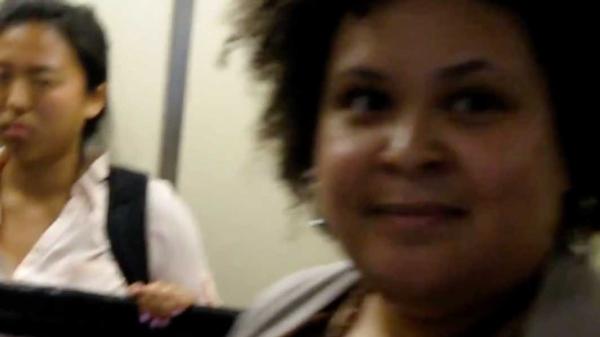 A feminist studies professor at the University of California—Santa Barbara (UCSB) verbally and physically assaulted a group of pro-life demonstrators earlier this month.

According to a video one of the demonstrators filmed during the altercation, Mireille Miller-Young, associate professor of feminist studies, taunted the students before physically taking one of the groups’ large signs—which displayed photos of aborted fetuses—and walking away.

“I may be a thief but you’re a terrorist.” the professor can be heard saying in the video.

Most of the pro-life demonstrators hailed from Thomas Aquinas College, a nearby school. The demonstrators were standing in a free-speech zone at UCSB when the altercation occurred.

The pro-life demonstrators followed the professor, who had their sign in tow, and were accosted by other students.

“She overrides you because she teaches at the university,” one student said.

Miller-Young—who according to her faculty specializes in a litany of areas including pornography, feminist and queer theory, and black film, at one point is seen attacking the student filming the incident—pushing her off the elevator and grabbing her camera.

“The University is aware of the incident and it is being reviewed by the appropriate offices. It is University policy not to discuss personnel matters,” a university spokesperson told Campus Reform in a statement.

Miller-Young did not respond to a request for comment.