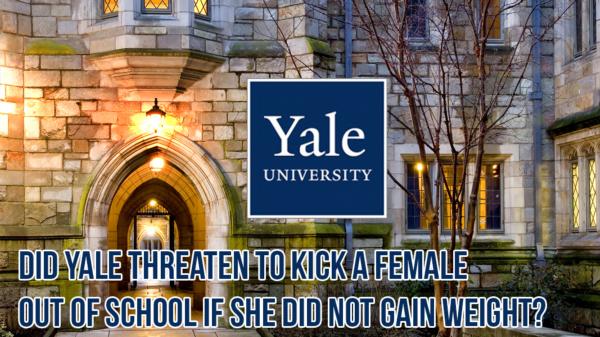 Students at Ivy League schools worry about keeping their grades and test scores up but not usually their weight.

But for Frances Chan, that was exactly the problem if she wished to continue her education at Yale University.

“Sounds to me as though Yale is way out of line, forcing a student to eat in a very unhealthy way to meet an arbitrary standard.”

It all started when the 20-year-old history major found a lump in her breast and did what any concerned female is taught to do—she immediately went to Smilow Cancer Hospital at Yale-New Haven. While the lump was benign, Chan received a follow-up email from Yale Health’s medical director calling her back in due to “a concern resulting from your recent visit”

That concern was not cancer-related, but about her weight. Chan stands at 5’2” and weighs in at 92 lbs.

According to Chan, she has always been thin, just as her parents and grandparents were at her age. She says she eats healthily and regularly, but Yale threatened to kick her out of school if she didn’t put on weight.

Over the course of several months at the command of the university, Chan visited a mental health professional, nutritionist, attended weekly weigh-ins and ate as much junk food as she could muster. She was allegedly told if she didn’t gain weight she would be placed on medical leave. At the end of it all, she had only gained two pounds.

Yale provides basic health coverage for all students, regardless if they have purchased health insurance from the university or an outside group. The basic coverage includes mental health, physicals and nutrition guidance. A staff member in the health services department told Campus Reform that there are no limits to how many times a student can utilize any of those services.

Even though those services are provided at no cost to Yale students, Chan was subjected to blood tests and an EKG—which are not covered under the basic coverage plan—all while still attending classes.

“We have a very good health system here on campus that provides care for our students and actually most of our faculty,” Tom Conroy, a spokesperson for Yale University told Campus Reform. “We also provide mental health counseling for students.”

Conroy could not comment specifically on Chan or her allegations against the university citing the HIPPA privacy rule.

“We have a pretty elaborate system of support for students,” he said.

Dr. Jane Orient, a member of the Association of American Physicians and Surgeons who specializes in internal medicine, said while she could not diagnose a person she’s never met over the phone, forcing medical care on a student is not appropriate.

“Sounds to me as though Yale is way out of line, forcing a student to eat in a very unhealthy way to meet an arbitrary standard,” Orient told Campus Reform. “Adults have the right to choose their own physician and medical treatment and to reject treatment. If school officials had evidence of mental incompetence or a life-threatening condition, they might be justified in intervening, but they should have to prove it.”

On Friday, Chan's new doctor finally admitted that body mass index isn't the only measurement of a healthy weight, relieving her of the mandatory weekly weigh-ins.