‘How To Be A Lesbian in 10 Days or Less’ cancelled after legislative intervention, Butchy McDyke responds with video 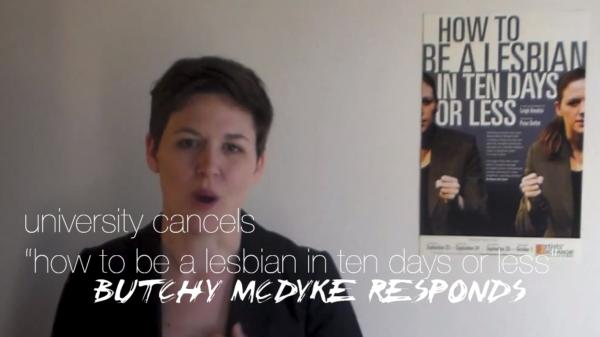 South Carolina state lawmakers have taken action against the University of South Carolina Upstate (USCU) due to content of their upcoming Bodies of Knowledge symposium which is scheduled to begin on Thursday.

As originally reported by Campus Reform, the LGBTQ seminar at USCU was scheduled to include a one-hour performance called “How To Be a Lesbian in 10 Days or Less” which would be funded partially by university funds. According to The State, the entire conference cost about $11,500 with about $5,000 paid by the school and $6,500 covered by private grants.

"Our state's system of higher education has been hijacked into spreading a liberal, social and political agenda which is morally repugnant to the overwhelming majority of South Carolinians. The continued use of public resources to advance this extreme liberal agenda clearly shows the contempt these so-called academic leaders have for the people who pay their salaries. The only thing they respect is money and I will use all the resources available to me to cut them off from the public trough,” Bright said in an exclusive statement to Campus Reform.

As a result of this legislative action, several USC trustees have indicated that greater scrutiny will be applied to future campus activities. Furthermore, the performance of How to Be a Lesbian in 10 Days or Less has been removed from the symposium schedule of events.

“The controversy surrounding this performance has become a distraction to the educational mission of USC Upstate and the overall purpose of the Bodies of Knowledge symposium. As a result, we have canceled this segment of the symposium,” said Tammy E. Whaley, USC Upstate’s assistant vice chancellor for university communications, in a statement to WYFF News 4.

The symposium is still scheduled to take place later this week and includes a panel on “How to be Queer,” moderated by Dr. Esther Godfrey, an affiliate faculty member of USCU’s Women and Gender Studies program.

According to Rep. Garry Smith (R), who earlier this year suggested $17,142 in budget cuts for USCU due to use of gay-themed literature, “[t]he university hasn’t fully understood what the objection is or they would have provided a panel or symposium that fully addresses the issue on an academic frontier. A panel on How to Be Queer is more of the same, one sided idea. It seems they are more interested in promotion. That’s not what we expect out of our colleges and universities is South Carolina.”

Butchy McDyke, the main character of the show How To Be a Lesbian in 10 Days or Less, has also weighed in on the subject through a video response, invoking both Winston Churchill and Oprah Winfrey. McDyke concludes, “And yea, I am a little bit angry, but I’m not going to let that get to me because I am still an expert lesbian...”