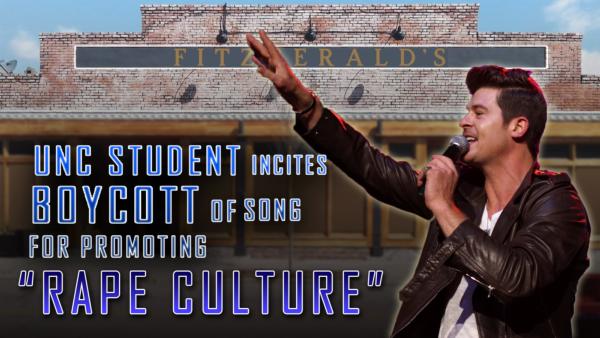 A University of North Carolina (UNC) student blurred the lines between censorship and “sexual violence” Saturday night when she fought to ban both the DJ and a popular Grammy-nominated song from Fitzgerald’s Irish Pub due to its supposed advocacy of rape culture.

“In a lot of ways, violent or graphic images that allude to sexual violence are triggers.”

“Fundamentally, all I was aiming to do is create a safe space in the Carolina community,” she said. “In a lot of ways, violent or graphic images that allude to sexual violence are triggers.”

Triggers have recently sprung to the scene, including on college campuses. Staunch proponents say triggers can set off flashbacks or memories for people who have undergone some sort of trauma.

Regardless, once Hawryluk left Fitzgerald’s, the kerfuffle didn’t stop. The UNC student took to social media, especially Facebook, to voice her dislike over the song, DJ and situation.

“As a college DJ, this blatant perpetuation of rape culture simply blows me away,” Dougherty posted.

“I think the bar and club culture in Chapel Hill and beyond needs a lot of help in the way it treats women,” he went on to tell The Daily Tarheel. “Especially in a liberal and educated college town, I think young women should feel safe to go out and have a drink and enjoy themselves.”

For their part, Fitzgerald’s, which is within walking distance from UNC, did issue a formal apology, officially banning the “Blurred Lines” song and the DJ—who was just visiting—from the bar.

“This song is played by many DJs at Fitzgerald’s, and other places, but it will never be played here again,” the apology, which can also be found on the pub’s Facebook page, says in part. “We have done extensive research on the song and seen how many other places have decided not to play the song and we will be joining them.”

Hawryluk told The Daily Tarheel that she will not be returning to Fitzgerald’s despite their apology, but not every student seems to share the same hypersensitivity she has vocally expressed.

“To implicate Fitzgerald’s, or any other bar in promoting or perpetuating said ‘rape culture’ is absurd,” Grayson Bates, a UNC alumnus said on the Facebook page. “Furthermore, such instances create the superfluous and unwarranted drama that effectively disillusions us from exploring avenues that might actually ameliorate the social ills that plague us. Rather than encroaching upon the experience of your peers and stamping a Scarlet A on a well run and upstanding establishment; why don’t you channel that energy toward educating women to protect themselves from the SCUM that decides to violate them? …. An actual solution to the problem rather than a distraction.”

Via The Daily Tarheel