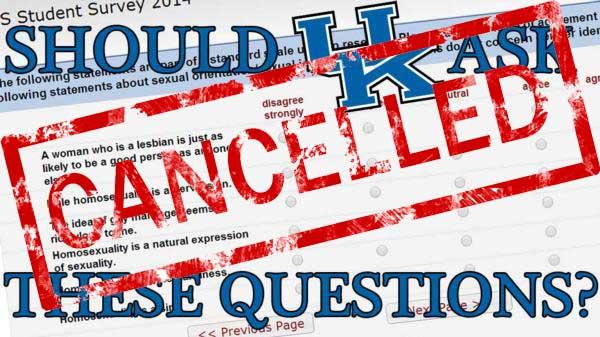 The University of Kentucky has stopped a campus-wide survey asking students if they think homosexuality is a "sin," apparently deciding that knowing this information is not worth the negative publicity it is receiving.

The survey, originally reported on by Campus Reform, asked students if they agree or disagree with statements such as “Male homosexuality is a perversion” and “If it were possible, I would be straight.” It was not made clear in the survey who would be reading students’ responses or if the survey was confidential, sparking concern and confusion among some.

"Students were asked what could easily be taken as intrusive and offensive questions and didn’t know why. It actually is surprising the University didn’t anticipate this response.”

“After the publicity garnered, the study was stopped a few days early because any further participants may be biased by the media coverage and could impact study results,” Kristi Lopez, a UK spokesperson told Campus Reform.

Dr. Keisa Bennett, the principal developer of the survey, decided to shut it down Tuesday after questions were raised in Campus Reform’s article. The survey was intended to be available for two weeks.

“Some questions in the survey have been concerning to individuals,” a university statement emailed to Campus Reform reads. “These questions which ask about feelings about sexual identity or orientation are from a validated scale and used in peer reviewed journals and used in previous surveys on other campuses.”

According to the statement, this was a follow-up survey from April 2013 in order to develop a criterion of the perceptions of health care services on campus.

“The fact that students did not seem comfortable with the execution of the survey is reason enough to believe it would not have produced valid results,” David Badash, editor of The New Civil Rights Movement told Campus Reform in an interview. “While the University’s intentions may have been good their execution does not appear to have been.”

Badash, who ran his own piece on the survey, called UK attempting to learn more about the needs of their students a “worthwhile endeavor,” especially as “there is far too little medical data on the mental and physical needs of the LGBT community, women, and minorities in general.”

“Each group has specific needs and it’s laudable when surveys focused on groups that have needs different than the larger general public are conducted in a proper, scientific, and trustworthy manner,” he said.

But Badash called the university’s attempt at just that by emailing a “questionnaire seemingly with personally-identifying data used to track the survey recipients, creating an environment not of trust but of fear — hardly wise.”

“I’m not aware that students were told the purpose of the survey, where the questions came from, how their responses would be used and tracked, or what benefit their participation in the survey would offer them or the University of Kentucky community,” he said. “In short, there appears to have been no transparency. Students were asked what could easily be taken as intrusive and offensive questions and didn’t know why. It actually is surprising the University didn’t anticipate this response.”

Keith Elston, an attorney based in Lexington, Ky., specializing in LGBT law, told the Lexington Herald-Leader that people had been “misled by initial news media reports.”

Elston plans to conduct his own survey through the organization he incorporated, Kentucky Youth Law Project Inc., completely independent of the university as he claims initial news reports had quotes “taken out of context.”

Elston did not respond to requests for comment from Campus Reform.

Just last week, school administrators who spoke to Campus Reform were initially hesitant to claim the university was responsible for the survey, believing it to have come from an outside source.