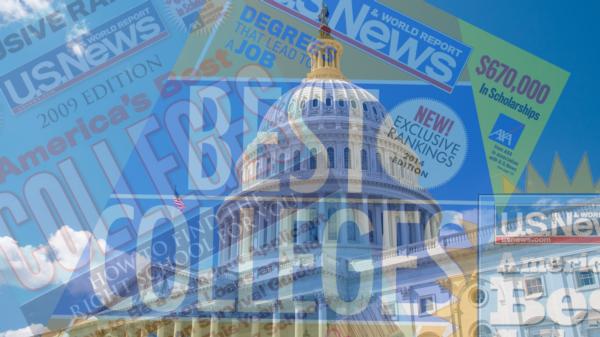 A dozen members of Congress are attempting to revamp the venerable U.S. News and World Report college rankings by imploring the publisher to include campus rape statistics in the annual reports.

“Institutions that fail to adequately respond to sexual violence should not receive any accolades from your publication,” says a letter signed by 10 Democrats and two Republican members of Congress. “We urge you to include violence statistics in annual Clery reports on campus crime statistics and information about institutions’ efforts to prevent and respond to incidents of campus sexual assault, including whether those institutions that have been found to be in violation of Title IX provisions regarding sexual violence, when ranking colleges and universities.”

The task force's proposal includes for colleges and universities to follow when handling campus sexual assaults, including a checklist for schools to use when drafting or revamping sexual violence policies. Schools are admonished to provide clear understanding to students about who they can report crimes to, especially who they can talk to confidentially.

John Elizandro, communications director for Meehan, told Campus Reform that the Pennsylvania Congressman’s background as a local and federal prosecutor propelled him to jump on board with the issue and that he is pleased with the task force's recommendations.

"The report issued by the White House is a vital step forward in the effort to keep students on college campuses safe," Meehan said in statement provided to Campus Reform. "These recommendations will help victims navigate the reporting process, enhance transparency in federal enforcement efforts, and help schools build community partnerships with organizations like rape crisis centers that provide critical services for victims."

Advocating U.S. News and World Report to include sexual assault statistics isn’t the first time Meehan has taken action on the issue. In 2012 he introduced H.R. 5844—the Protecting Victims on Campus Act, bipartisan legislation which sought to reform safety protections on college campuses.

Meehan also represents a district with a large concentration of colleges and universities and came up with his own list of recommendations for the White House’s task force with the help of a panel of "experts" including representatives from higher education, law enforcement and victim advocacy organizations from the Philadelphia area.

"I'm pleased that the White House report addresses the concerns of so many in our region on the front lines of the effort to protect students," Meehan said.

Speier, who spearheaded the recommendation to include statistics in college rankings, told The Atlantic that she doesn’t think this endeavor would encourage colleges to skew their numbers.