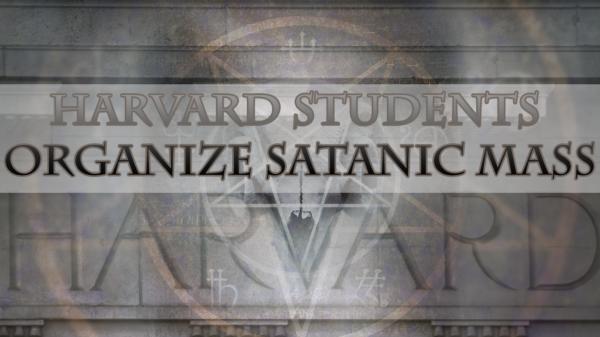 The event hosted by the Harvard Extension Cultural Studies Club will feature a performance by The Satanic Temple. According to their website, the religious organization's mission is “to encourage benevolence and empathy among all people.”

A black mass is a “magical ceremony” meant to parody a Catholic mass, supposedly during “Witches’ Sabbath”—a meeting of those practicing witchcraft. The ritual serves to mock God and worship the devil, even going so far as “to involve human sacrifice as well as obscenity and blasphemy of horrific proportions.”

Lucien Greaves, a spokesperson for The Satanic Temple, confirmed to Campus Reform that the event is to take place next week. According to him, the reenactment ritual will include different elements of "conspiracy theories" dating back to days of witchcraft.

But in an interview with Campus Reform, Greaves said the black mass has become more ambiguous and convoluted as it incorporates more theories and more religious rituals over time. On the other hand, some of the elements present in the 19th century rituals are simply no longer there.

Greaves confirmed the ritual will use a "host" although as the group doesn't believe in the "supernatural elements," he couldn't call it a "consecrated host" as Catholics do.

"Consecrated or not, it means nothing to us," he said.

Greaves has spoken to college classes in the past, but this is the first ritual the satanic organization has performed on campus. He said they are generally more concerned with engaging in socio-political dialogue. 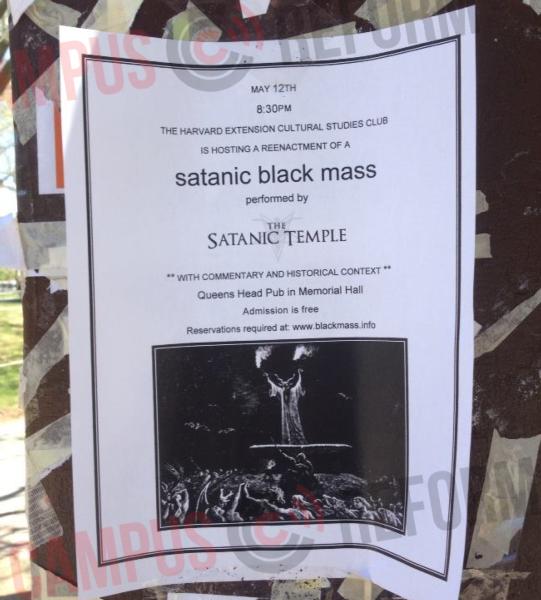 The free event will be held May 12 at the Queen’s Head Pub in Memorial Hall, an on-campus bar. The pub is technically closed for the summer but is still available to be rented out for private events. A spokesperson for the pub confirmed to Campus Reform that the club had reserved space for that day.

According to the registration page, the reenactment will feature commentary as well as historical context.

Last year, the Cultural Studies Club at Harvard’s Graduate School of Education hosted a “History of Satanic Worship” with academics and practicing Satanists. It is unclear if the graduate school and the extension school groups are the same or affiliated.

A university spokesperson confirmed to Campus Reform the event is not sponsored by Harvard. Shortly after, Harvard's extension school released a press release further solidifying the school's distance from the event.

"Harvard Extension School does not endorse the views or activities of any independent student organization," the release states. "But we do support the rights of our students and faculty to speak and assemble freely."

CBS Boston has reported that "[t]he Archdiocese of Boston wants Harvard to put a stop to the event."

"The Catholic community in the Archdiocese of Boston expresses its deep sadness and strong opposition to the plan to stage a “black mass” on the campus of Harvard University in Cambridge. For the good of the Catholic faithful and all people, the Church provides clear teaching concerning Satanic worship.

This activity separates people from God and the human community, it is contrary to charity and goodness, and it places participants dangerously close to destructive works of evil."

This article has been updated to include additional information.