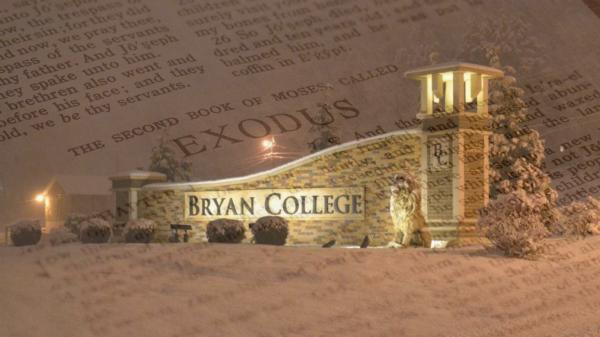 At Bryan College, a change in the Christian liberal arts school’s statement of faith has caused an exodus of sorts.

The school’s statement of faith, which all Bryan faculty and staff must sign each year, originally stated “that the origin of man was by fiat of God in the act of creation as related in the Book of Genesis; that he was created in the image of God; that he sinned and thereby incurred physical and spiritual death[.]”

“[T]he College refused to renew the annual contracts of these tenured professors because they would neither affirm nor deny what the Board of Trustees calls a ‘clarification’ to that part of the Statement of Belief pertaining to Creation.”

But in February, Bryan’s president and Board of Trustees changed the statement to say, “We believe that all humanity is descended from Adam and Eve. They are historical persons created by God in a special formative act, and not from previously existing life forms.”

While the change—or “clarification” as the university calls it—has struck a nerve with the personal beliefs of some faculty, it’s the swiftness of the switch that has caused the most uproar on campus.

“We have never been told by the president or board members or anyone why it had to be done right now,” Dr. Phil Lestmann, professor of mathematics and head of the school’s Natural Sciences department told Campus Reform in an interview. “They really didn’t seem to care or even think about the faculty who were forced to leave because of their actions.”

At least two tenured professors had their employment terminated after they submitted their contract with the original statement of faith and not the updated one. Dr. Stephen Barnett had taught at the school for 31 years and Dr. Steve DeGeorge 12 years.

“[T]he College refused to renew the annual contracts of these tenured professors because they would neither affirm nor deny what the Board of Trustees calls a ‘clarification’ to that part of the Statement of Belief pertaining to Creation,” Ed Nanney, a lawyer representing both men, told Campus Reform.

But Bryan’s charter explicitly states that the statement of faith cannot be changed, leaving many faculty and students questioning the motives behind the president’s desire to draw a fine semantics line between “change” and “clarification.”

Spencer Solomon, a senior exercise health science major at Bryan, doesn’t understand why the clarification was need, especially so abruptly.

“To be honest, I don’t really care about the clarification as the wording in the statement means nothing to me,” Solomon told Campus Reform. “What does matter to me is (1) according to the charter, it cannot be changed and (2) we’re losing so many good teachers going into the next semester, and it appears we are going to continue losing them.”

Students don’t have to sign the statement of faith, as it is just a part of professors’ contracts. However, that hasn’t stopped them from launching a campaign on campus to vent their frustration to the administration.

Led by junior biology major Robin Harrison, students have written letters to the board of trustees, signed petitions and even taken to social media with the hashtag #HearMyVoiceBC to showcase their frustrations to the administration.

I think the only way we could be "happy" with current happenings is if we didn't care. But we do care. We love this place. #hearmyvoiceBC

Pains me to see good men (friends and mentors) forced out due to violation of the college charter. #HearMyVoiceBC #clarificationisammedment

Since when does a "solid" campus allow for several professors to leave in silent protest? #hearmyvoiceBC

"The board promises to meet the needs of your major next year." Ummm.... Maybe my major needs Dr. DeGeorge. #hearmyvoiceBC

Moreover, Dr. Lestmann told Campus Reform that financial troubles are a main concern among those at the college. Fall enrollment numbers are seeing a decline and one dormitory is set to close amid severe budget cuts.

“Some of us are questioning if the president [changed the statement so quickly] to throw up a smokescreen to distract from the school’s financial status,” Lestmann said.

Regardless, Lestmann says it’s clear the president cannot lead the school under its current conditions as it’s not an environment that would readily draw in new faculty to replace the ones leaving.

“He might have a vision, but he cannot solve it,” he said.

At time of publication, at least 9 professors have either resigned or been fired. According to students at the university, several of their peers have opted to transfer to a different school for the next semester.

Bryan College did not respond to multiple requests for comment.