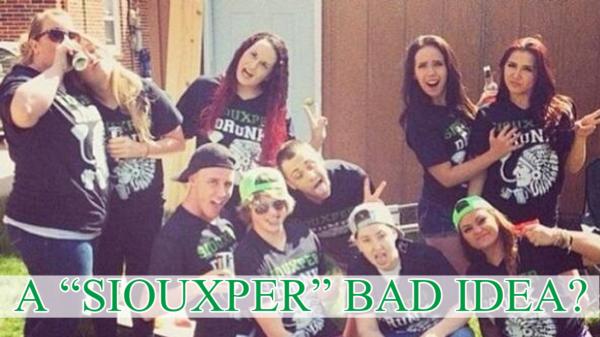 Students at the University of North Dakota (UND) are facing backlash after making quite the fashion statement at the school’s infamous end-of-the-year celebration.

The students debuted black shirts with green and white writing (the school’s official colors) bearing the words “Siouxper Drunk” at UND’s “Springfest” festival. The shirts also featured a Fighting Sioux logo--the official mascot of the university until 2012 when North Dakota residents voted to dump the logo after heavy pressure from the NCAA.

“The message on the shirts demonstrated an unacceptable lack of sensitivity and a complete lack of respect for American Indians and all members of the community.”

On the shirts, the logo was altered to include a beer funnel with the Fighting Sioux.

The students wasted no time in posting photos of the shirts on social media. The shirts received backlash with many calling the students racist.

UND’s President Robert Kelley released a statement condemning the students’ actions and clarifying that the students were not at a UND-sponsored event and didn’t appear to wear them on campus.

“I was appalled to learn this weekend that a group of individuals had the poor judgment and lack of awareness and understanding to create and then wear T-shirts that perpetuated a derogatory and harmful stereotype of American Indians,” Kelley said. “The message on the shirts demonstrated an unacceptable lack of sensitivity and a complete lack of respect for American Indians and all members of the community.”

Kelley’s statement went on to even remind students of the school’s counseling center if appointments needed to be made.

But Kelley wasn’t the only one distancing himself from the students. CustomInk, the shirt design company that produced the shirts, apologized.

“We are very sorry about this offensive design,” the company said in a statement provided to Campus Reform. “CustomInk’s business is focused on bringing people together in positive ways. We handle hundreds of thousands of custom t-shirt designs each year and have people review them to catch problematic content, including anything that’s racially or ethnically objectionable, but we missed this one. We apologize for any pain or offense caused by this shirt, and we will continue to improve our review processes to make them better.”

It is unclear if any CustomInk employee was reprimanded for failing to review the UND students’ shirts as a spokesperson for the company declined to comment any further than the statement.

Although the shirts were not worn on campus, it is also unclear if the students will face any sort of actual punishment from the university. A university spokesperson did not return Campus Reform’s requests for comment.