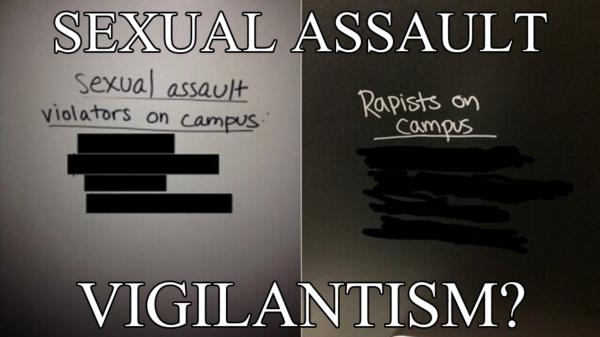 With Columbia University entangled in almost two dozen separate federal complaints regarding the school’s mishandling of sexual assault cases, it seems some students have taken sexual violence safety into their own hands.

According to The Lion, a student-run blog, the names of four different undergrads were scrawled onto the wall of a women’s bathroom on campus under the heading “sexual assault violators on campus.” The blog, which ran photos but redacted the students’ names, claims that each name was written in different handwriting, suggesting that different women added different names to the list.

This isn’t the first time students have taken to bathroom walls to shame their alleged rapist peers. In 1990, a similar list of more than 30 names circulated Brown University’s campus.

After Facilities removed the first list, a second list popped up with the same four names in the bathroom of a different building on campus. This list appeared to have been written by one person and under the heading “rapists list.”

Daniel Held, executive director of communications for Facilities told The Lion that the writing was labeled as “graffiti.” That could mean whoever wrote the names on the walls could be held accountable by the university for vandalism.

“We were alerted to the bathroom graffiti in Hamilton Hall, and Public Safety investigated,” Held told The Lion. “Graffiti is routinely removed by Facilities staff.”

Held did not respond to requests for comment from Campus Reform.

This isn’t the first time students have taken to bathroom walls to shame their alleged rapist peers. In 1990, a similar list of more than 30 names circulated Brown University’s campus.

Columbia is currently facing 23 federal complaints by students who claim that the university violated the Clery Act and Title IX by failing to handle allegations of sexual assault on campus.

A representative from the university had not returned Campus Reform’s requests for comment by time of publication.

Update: While university employees were busy taking down the bathroom graffiti, unknown authors have printed flyers that are appearing in women's bathrooms across campus. The flyers, labeled "RAPISTS ON CAMPUS," list the same four names that had previously been written on the bathroom stalls. Three of the names say "(found 'responsible' by the University)" afterwards, but one name includes "(serial rapist)."

According to Jezebel, the list includes one musician, one writer of a campus publication and an athlete.