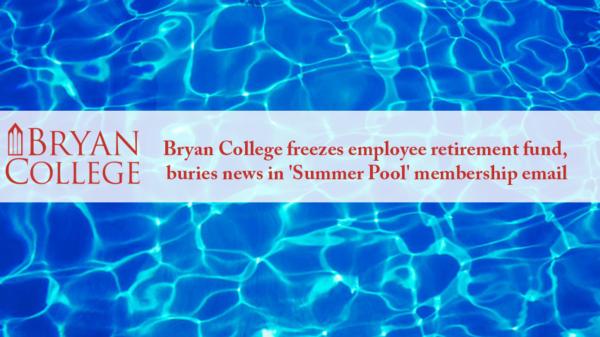 Buried in a lengthy informational email about summer pool membership at Bryan College, faculty and staff were sent some bad news--the school has decided to suspend retirement benefits for May and June .

“Due to the recent decision to freeze spending to ensure meeting our 2013-2014 budget, we are suspending the Bryan contribution portion of the retirement benefit for all full-time employees for May and June,” the email obtained by Campus Reform said. “We expect this benefit will remain suspended into the 2014-2015 fiscal year although the budget has not been finalized.”

"So, rather than grow, the college's strategy is to just keep cutting. But hey, for a mere $125 we can have a pool pass!"

The news came to Bryan staff at the second to last paragraph in an email with the subject line “Summer Pool” sent on May 12. The rest of the email details the pool hours, prices of pool summer membership ($125 for a family and $75 for an individual) and how the pool lottery will work.

"So, rather than grow, the college's strategy is to just keep cutting," one professor told Campus Reform. "But hey, for a mere $125 we can have a pool pass!"

While this was the first time Bryan faculty were made aware (if they carefully read through the email, that is) that their retirement benefits would be suspended, it’s not the first time the Bryan community was made aware of fiscal troubles.

In an email dated April 15, staff was made aware of spending freezes for the rest of the year although what was deemed “unnecessary spending” was left up to the discretion of the administration.

“As you may know from several announcements and conversations, Bryan College is facing significant financial pressures,” the email says. “Due to those pressures the cabinet has agreed to freeze on all unnecessary spending. All requests for spending must be pre-approved by the academics office, or in AGS, by the Dean’s office, effective immediately.”

Bryan College did not return multiple requests for comment.