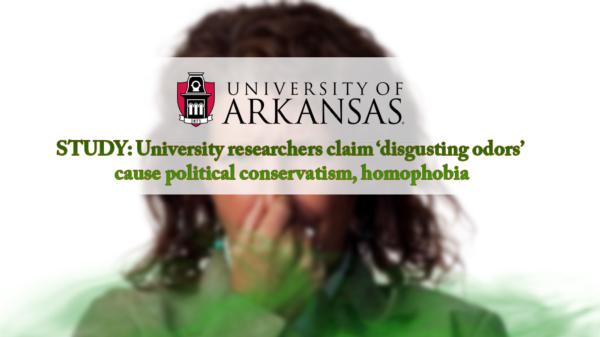 Researchers at the University of Arkansas have found that exposure to disgusting odors increases social conservatism.

Using only a small pool of students and community members, a recent study called “Disgust and the Politics of Sex” found that repugnant smells directly correlate with political conservatism and a general disdain of specific social groups—in particular, homosexuals.

"Disgust sensitivity and reactivity have been shown to relate to political conservatism generally and have been implicated in negative and hostile attitudes towards a range of social out-groups, particularly homosexuals."

“Disgust sensitivity and reactivity have been shown to relate to political conservatism generally and have been implicated in negative and hostile attitudes towards a range of social out-groups, particularly homosexuals,” the report, published in the journal PLOS One, says. “In keeping with the aforementioned research, some have suggested that disgust is specifically related to conservative attitudes that pertain to social or moral purity, and, in particular, sexual purity.”

However, the researchers’ findings were the result of only 57 participants. Twenty-seven people were exposed to a stench of rancid butter and sweat while the remaining thirty were not. Participants were paid $10 each.

All participants were required to complete a questionnaire comprised of moral and sexual situations. They were asked to rate the scenarios and ideas on a scale of “not disgusting at all” to “extremely disgusting.”

PLOS One is a peer-reviewed research publication featuring reports on science and medicine.

The University of Arkansas is one of the top 50 public research universities in the United States.