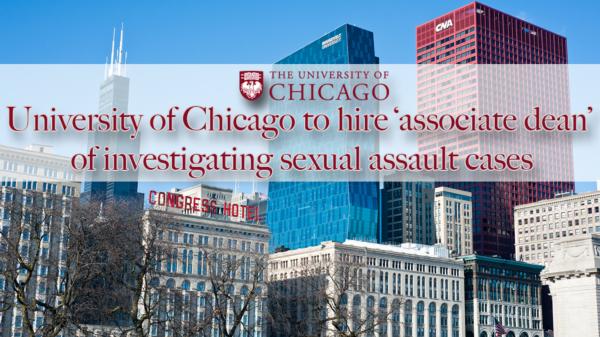 While the federal government investigates the University of Chicago’s (U of C) alleged mishandling of reported sexual assaults, the school will hire a new dean tasked solely with investigating them.

Effective July, U of C will implement a new associate dean of students who, according to a university spokesperson, will only cover “sexual misconduct and harassment/discrimination.”

“We still don’t know what’s coming from that. They still haven’t given us their conclusion.”

The university will also implement a special disciplinary committee comprised of faculty, staff, and students to hear cases of sexual misconduct.

“The disciplinary committee will come from a university-wide pool representing all academic units; students will most likely be selected through a combination nomination-application process,” Jeremy Manier, the university’s spokesperson told Campus Reform. “Such committees do undergo training for their duties.”

The university is already under fire for allegedly mishandling one student’s claims that the school mistreated her when she reported a sexual assault. According to the student, she was portrayed as a “hysterical woman in the situation.”

While the Office of Civil Rights (OCR) has been investigating U of C since mid-January of this year, a university official confirmed to Campus Reform that the policy changes, introduced in February, are completely separate from the OCR investigation.

“We still don’t know what’s coming from that,” the university official said. “They still haven’t given us their conclusion.”

The official said U of C has always been forthright and transparent regarding the OCR investigation and the implications that the policy changes are a result of the federal crackdown are inaccurate. OCR is investigating more than 50 schools for mishandling reports of sexual assaults.

“[T]he modifications under consideration reflect the experiences and advice of student advocates, faculty who sit on disciplinary committees, and deans, who have highlighted the need for special expertise in cases of sexual misconduct and discrimination, and called for University-wide procedures,” February’s press release states.

“Currently, these types of cases are investigated by the accused student’s area dean of students and disciplinary committees include faculty from that student’s academic unit,” Manier said.

Besides launching a resources website, NotAlone.gov, the White House called on universities to complete the “campus climate surveys” on sexual assaults and empower campus judiciary systems. The task force was created by Obama, who was a professor at U of C’s law school from 1992 to 2004, in January.

Organizations such as the Rape, Abuse and Incest National Network and the Foundation for Individual Rights in Education have decried the White House’s recommendations for encouraging universities to forgo due process and instead rely on their own judiciary committees.

Manier was not able to tell Campus Reform if there were any safeguards in place for those accused of sexual assaults within the new policy.

According to the federal Clery database, U of C’s reported sexual assaults on the main campus have climbed from three in 2010 to five in both 2011 and 2012.

As U of C is a private institution, the salary for the new associate dean will not be made public.