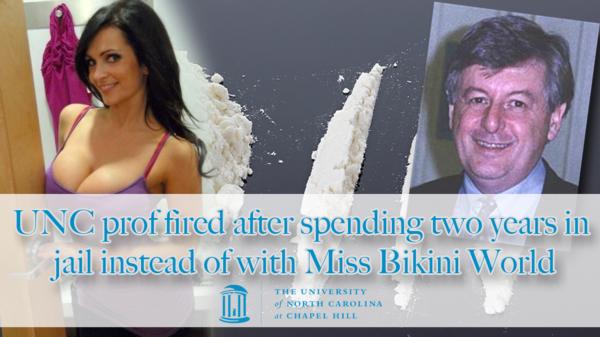 A University of North Carolina-Chapel Hill (UNC-CH) professor has been fired after being jailed in Argentina for the past two years.

Paul Frampton, a 70-year-old physics professor, was arrested in 2012 after he flew to Argentina supposedly to meet a former Miss Bikini World but instead got involved in a drug smuggling scheme.

UNC Chancellor Carol Folt officially fired Frampton this month for misconduct and neglect of duty. Former Provost Bruce Carney apparently informed Frampton of his intent to fire the professor in 2013, sparking outrage among the academic community who thought the university was setting a precedent for firing tenured professors.

“I concur that you committed misconduct of such a nature as to render you unfit to serve as a member of the faculty of this University,” Folt wrote in a letter to Frampton after the Faculty Hearings Committee recommended his termination.

"I also agree that you have neglected your duty in a manner and degree that warrants your dismissal from University employment," the letter obtained by Campus Reform states.

Frampton does have the option of appealing the university’s decision to the board of trustees within the next two weeks.

While in prison, Frampton contested the university’s decision to withhold his pay, even requesting a raise. The professor argued that he was still able to complete most of his normal duties, including conducting research and advising students via phone (he is able to make phone calls but cannot receive them).

After his arrest, Frampton was immediately put on personal leave without pay while he awaited his trial in Argentina. He was sentenced to four years and eight months in prison, but under Argentine law, he can be deported after serving half of that time.

According to Frampton, he met a man at the Buenos Aires airport who claimed to be bikini model Denise Milani’s representative. He said the man gave him a suitcase to deliver to her, which he did not know was lined with cocaine.

Frampton’s CV states that he has been at the university since 1985 and was promoted to distinguished professor in 1996. At the time of his arrest, Frampton made $107,000 annually.