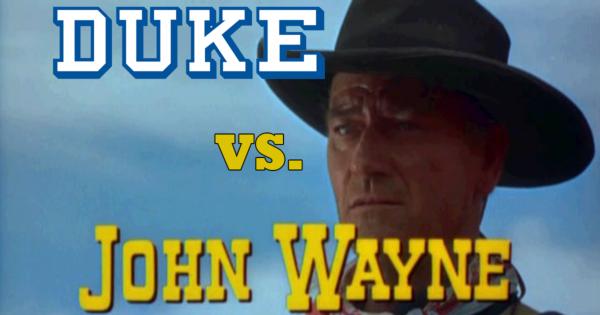 Heirs of the legendary John “Duke” Wayne are entering a legal battle against the prestigious Duke University.

Last year, John Wayne Enterprises, run by the Wayne family, filed for a trademark application to use the nickname “Duke” on labels for their new line of bourbon. The university alleged moved to block the application on the belief that it could confuse consumers.

"Duke University seems to think it owns the word 'Duke' for all purposes and applications."

“Duke is a common word that has been used for centuries in a wide array of commercial and other applications wholly independent of Duke University,” the family’s lawsuit argues. “Yet [. . .] Duke University seems to think it owns the word 'Duke' for all purposes and applications.”

Duke University spokesman Michael Schoenfeld told Campus Reform that “Duke University does not object to use of ‘The Duke’ on liquor or other products that unmistakably connect the product name to John Wayne through words or an image. However, this suit seeks to establish the estate's ability to use the name "Duke" even without an explicit connection to Mr. Wayne, which Duke University opposes because of the potential for confusion.”

“The University has worked collaboratively and successfully with the John Wayne family for over a decade when potential issues arise about the use of our trademarks,” and this dispute is “a very specific situation that has been in negotiation for some time,” Shoenfeld said.

The United States Patent and Trademark Office lists more than 250 active trademarks that include the word “Duke,” including jazz legend Duke Ellington and a brand of mayonnaise.