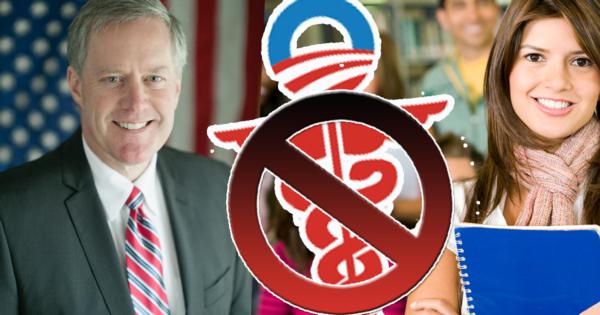 With colleges across the country capping student work hours because of provisions in the Affordable Care Act (ACA)—commonly called Obamacare—Rep. Mark Meadows (R-N.C.) has introduced legislation which would exempt student workers from the employer mandate.

The Student Worker Exemption Act, introduced in the House last week, would exempt colleges from having to provide health insurance to student workers who work 30 hours or more per week as mandated by President Obama’s healthcare law.

"My heart goes out to any student workers who have had hours cut or lost jobs because of Obamacare." Rep. Mark Meadows

“Whether you’re an Obamacare supporter or someone like myself who opposes the law, you can agree that jeopardizing student employment options at a time when student loan debt is $1.08 trillion and the cost of tuition is rising is unacceptable,” Meadows told Campus Reform.

The Student Worker Exemption Act is backed by Western Carolina University (WCU) Chancellor David Belcher, who first inspired the legislation, and Tom Ross, the President of the University of North Carolina (UNC) System. The UNC system assisted in the drafting of the bill, according to Meadows’s office.

“I worked closely with the colleges in my district to hear their concerns and get their input on this bill,” Meadows said. “Both President Ross and Chancellor Belcher recognized the huge cost burden the Employer Mandate would put on colleges, and the dire impact it would have on many students who rely on on-campus employment to pay their tuition.”

The American Council on Education (ACE) and the College and University Professional Association for Human Resources (CUPA-HR) have endorsed the bill.

As previously reported by Campus Reform, officials at the University of Kansas recently capped work hours for undergraduates at 20 hours per week in order to “balance the necessity for students to make academic progress while managing potential fiscal liabilities with ACA.”

“My heart goes out to any student workers who have had hours cut or lost jobs because of Obamacare,” Meadows told Campus Reform. “This law has hurt countless small businesses and families—and now young people are feeling the pain as well.”

The UNC system as an entity has discussed cutting hours and jobs for its employees in order to not have to pay as much as $47 million extra due to ACA regulations.

“Campuses are going to have to make changes to their business model,” Brian Usischon, UNC Associate Vice President for Human Resources, told Campus Reform in March. “That may mean less temporary employees than they would otherwise have.”

Then, UNC officials estimated they would “likely” have to cut the hours of roughly 75 percent of eligible employees, lowering the cost to $11-$22 million.

According to the Asheville Citizen-Times, WCU employees 1,500 students with 75 of them working at least 30 hours per week. Belcher estimated the insurance cost for those students alone to be $302,515 per year.

WCU does require its students to have insurance—either through their parents’ policies or purchased through the university system plan.

"Our student workers are students first, and, as WCU students, they already are required to have health insurance," Belcher told Campus Reform.

WCU has not yet capped student work hours, but Belcher said the university would consider that as an option if it is required to provide health insurance to student employees.

"Universities simply don't have the funding to cover the cost of health insurance for student workers and would be looking at a variety of options to deal with the situation. For our university to cover the cost of insurance for student employees, we might have to raise tuition and fees, or we might have to greatly reduce the number of student employees," Belcher told Campus Reform. "This second option would prove counterproductive to efforts to keep students on track to graduate in four years because we know that employment on campus, as opposed to employment elsewhere, increases the likelihood that students stay enrolled, make good grades and graduate on time."