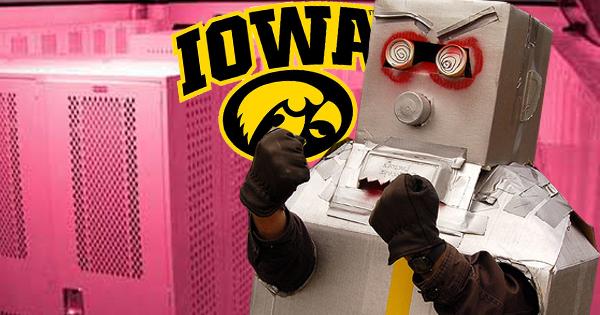 A University of Iowa (UI) professor is protesting the venerable football team’s “sexist” pink visitor locker room by marching around in a robot costume Friday afternoon.

Kembrew McLeod, director of graduate studies at the university, organized Friday’s march in order to draw attention to criticism of the locker room as some students and faculty have deemed its pink paint job sexist. McLeod also says the color condones homophobia.

“This trend away from hypermasculinity in sports makes it all the more unfortunate that the University of Iowa still hosts visiting teams in pink locker rooms.”

“This trend away from hypermasculinity in sports makes it all the more unfortunate that the University of Iowa still hosts visiting teams in pink locker rooms,” McLeod wrote in a recent editorial.

The “ Million Robot March” falls on the annual celebration which honors former Iowa football coach Hayden Fry, the winningest football coach at the university. In 1979, Fry had the visitor locker rooms painted pink as the calming nature of the color could “put [the] opponents in a passive mood,” according to his memoir.

“Amazingly, top administrators still defend this move; it’s as if the university has sided with the jocks who used to beat up the ‘queers’ in high school,” the march’s website states. “Does a pink locker room directly lead to violence against women and gay people? No. But it does reinforce the repeated narratives about being a man that kids are exposed to from a very young age—which creates subtle and harmful ripple effect.”

According to Inside Higher Ed, the University of Iowa renovated their athletics facilities in 2005, adding new lockers, urinals, and showers in various shades of pink.

“That’s what pranks do — they shake up our everyday routines and surprise us with an unexpected and unconventional sight, sound or performance,” McLeod said. “Sadly, UI’s pink prank amounts to little more than a juvenile taunt, a sophomoric stunt left over from a bygone era.”

Yet not everyone finds the locker room’s decor offensive. University of Michigan quarterback Devin Gardner insisted it was the “best locker room for an away team.”

“[It’s] spacious. I don’t care about the color, it has a lot of space,” Gardner said.

IU President Sally Mason said earlier this week that repainting the locker rooms wasn’t a priority for the school.

"To tear that apart and spend the money right now to redo that just seems like a very low priority to me," Mason told Fox News. "Would a pink locker room have been my first choice? Probably not. But that predates me by quite a little bit."

Friday’s march isn’t the first time McLeod has donned his robot costume to make a statement. He previously protested President Clinton and Representative Michele Bachmann (R-Minn.) as a heckling robot.

The “Million Robot March” will convene Friday afternoon at 4:30 p.m. Robot costumes are not required.