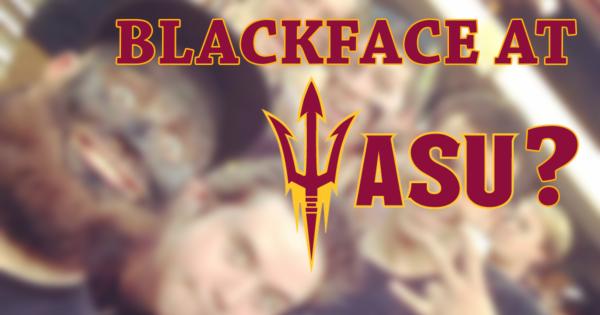 Members of Arizona State University’s (ASU) Black and African Coalition are outraged after students painted their faces black during the school’s football game against the University of California-Los Angeles.

The game was a “blackout” and ASU students were encouraged to wear all black clothing. Some students also painted their bodies and faces black.

"It doesn’t show school spirit; it represents cultural insensitivity at the end of the day."

However, ASU’s Black and African Coalition (BAC) have deemed the students’ school spirit “insensitive” and “ignorant.”

“The historical context of blackface is that it is demeaning to the African-American culture,” Kyle Denman, president of BAC, told The State Press, ASU’s student newspaper. “It doesn’t show school spirit; it represents cultural insensitivity at the end of the day.”

Denman also posted a photo of several students participating in the “blackout” to his Facebook page.

“You can't tell me that he didn't know what he was doing,” he wrote in the photo’s caption. “People will act ignorant for as long as you let them. It's our responsibility to stand firm in our beliefs, and question our university when it fails us. ASU may choose to ignore the situation, but at least our voices are being heard.”

The BAC plans to introduce a bill to ASU’s student government at the end of October that will “bring awareness to racial issues at ASU events and the insensitivity that is taking place on campus,” the State Press reported.

Isabelle Murray, a member of ASU’s student government and author of the bill, said that even though she has heard students say the face painting is not an issue, it still reflects poorly on the university.

“I know some people who have said it’s not really blackface, he just painted his face black but if you take that picture out of context, how does that reflect on ASU?” Murray told the State Press.

“I feel like if you are in college, then you should know better,” she also said. “I mean, what kind of education are you getting if you don’t understand the historical context?”

BAC reportedly wants there to be consequences for racially insensitive events at ASU.

“I think the immediate consequences should be not allowing them into the event and then make them attend these events like caucuses or classroom workshops where they are made aware of why it is culturally insensitive to students who are Native American or African American or whatever race it is that they identify with or sex or whatever, because it goes either way,” Denman told the State Press.

But James Malone, a junior economics major at ASU, told Campus Reform that BAC’s bill is “definitely an overreach.”

“One can understand the concern of some people who are upset about people painting their faces, but I think that it’s an overreach that they want to implement classes to teach [students] to not black out their faces.”

Malone told Campus Reform that these students at the football game were acting out school spirit rather than intending to be racist. He said that the “blackout” games are nothing new for ASU.

Neither Denman nor Murray responded to requests for comment from Campus Reform.