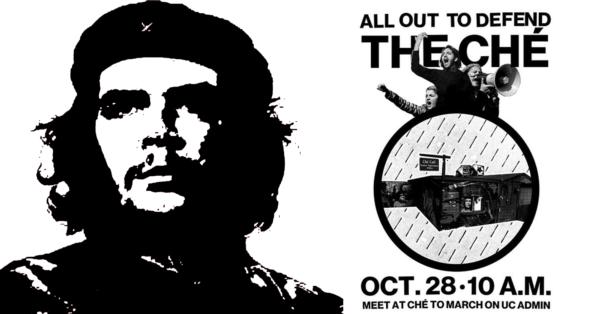 In the guerrilla spirit of the venue’s namesake, University of California at San Diego (UCSD) students protested the school’s eviction of the Che Cafe Collective.

Students gathered Tuesday morning at the co-op before marching across campus to UCSD Chancellor Pradeep Khosla’s house in the “Save the Che Rally: The Che chats with the Chancellor.” Organizers planned to present him with a petition of support for the venue that allegedly has more than 10,000 signatures (a Change.org petition had 1,736 signatures at time of publication).

The Che Cafe, a music venue collective, was decertified by UCSD’s student government and evicted by the university in June for allegedly failing to pay rent and keep up-to-date with safety regulations. The students were given 30 days to vacate yet chose not to do so.

“These circumstances represented both a danger to student's safety and net loss to [the] student body because it inhibited other groups or organizations from using that space for more productive purposes,” Austin Peters, a senior political science major at UCSD, told Campus Reform of the venue’s negligence.

Peters said the decertification of the collective “ends an inerrant tension that the cafe brought to UC San Diego: we claim diversity, equality and inclusion, but yet have a space pay homage to man who led execution squads during the Cuban Revolution.”

“One of biggest problems with these student activists is they are blindly marching for the Che simply because it is being promoted as way to resist the administration,” Peters said of Tuesday morning’s protest. “It is quite ironic and terrible that people who claim to bring ‘oppressed narratives’ to light fail to see they are promoting the legacy of a man who is associated with so much murder and oppression.”

Last week, San Diego superior court judge Katherine Bacal ruled in favor of the university during an eviction hearing. Bacal said that UCSD owned the property and the eviction notice it had previously sent to the collective was legitimate.

Bacal is expected to issue a written statement to the collective in which they will then have five days to vacate the premises.

The Che said via Twitter that they plan to appeal Bacal’s decision.

Supporters of the iconic venue argue that the university has tried to attack the collective and its student members consistently throughout the venue’s 34 years of existence.

“They’re students, and they’re not as sophisticated as a savvy administration that was misleading them and providing contradictory information…” Bryan Pease, the collective’s lawyer, told NBC San Diego after last week’s hearing.

The Che did not respond to requests for comment from Campus Reform.

UPDATE: While earlier event details cited the end of the protest to be at Chancellor Khosla's house, it in fact ended at his office.