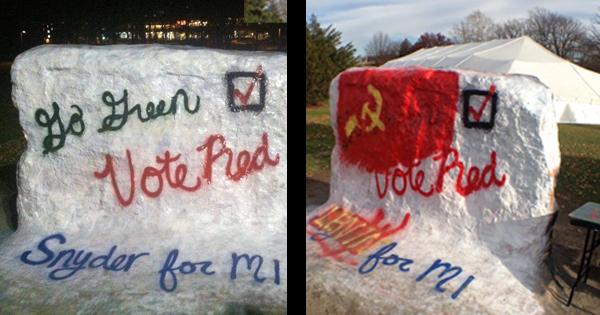 The messages appeared overnight on a rock that MSU’s College Republicans had reserved for Election Day. Student groups are able to advertise events or promote campus activism on the rock by reserving the space through student services--although that generally doesn’t stop other student groups from repainting it.

“I thought it was poor taste on whoever did it,” Matt Bedard, a senior political science major at MSU told Campus Reform. “I’m really disappointed to see that when we have this Democratic system people can’t operate with tact and respect.”

Bedard, who is a member of MSU’s College Republicans as well as various other conservative student groups, said that while their intention with the rock was to spread a conservative message on Election Day, they had no animosity toward their opponents.

“Obviously our leftist and Democratic opponents weren’t of the same mindset,” he said.

Bedard told Campus Reform that members of the College Republicans camped out in shifts in order to prevent other student groups from vandalizing their work at first. Indisputably, their plan was not successful.