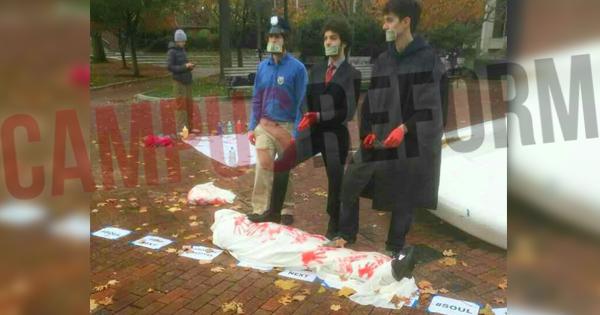 Every Friday a group of students dress up to protest capitalism and the American Dream in what they’ve deemed “Ferguson Friday.”

Three white University of Pennsylvania students—dressing up as capitalism, law enforcement, and America’s judicial system—stand over another student lying on the ground in a white sheet covered with red handprints. The three standing students have their hands painted red with bloody dollar bills taped over their mouths, according to the photo obtained by Campus Reform.

“It’s to keep people conscious about Mike Brown and the other black and brown people who have died from police violence and also to spread awareness to the plight and oppression that’s affecting all people of color here in America and all of the world,” Breanna Moore, co-founder of Students Organizing for Unity and Liberation, said of the protests in a YouTube video.

According to one student who wished to remain anonymous for fear of retribution from the group, students from all races are involved in SOUL.

“It seems especially striking to me that they chose three white students for that particular display,” the student told Campus Reform.

The students perform their demonstration outside of UPenn’s library and encourage passersby to participate in adding to a mural which is to show different ways people of color have been discriminated against in the United States “since we got here,” Moore explains in the video.

The mural, which includes things such as Jim Crow laws and the Indian Removal Act, is called “AmeriKKKan Dream.”

“It’s basically playing on how America, the dreams of America, have been excluded from black and brown people and how it has really been a nightmare in some instances,” Moore said.

Besides the mural and the skits, SOUL set up a mock graveyard on UPenn’s campus last week during Ferguson Friday. The graveyard was meant to pay homage to “black and brown bodies killed by police brutality.”

The student protestors will also at times throw up their hands before all dropping to the ground and pretending to be dead.

On Monday, Gov. Jay Nixon issued a state of emergency ahead of the grand jury decision on whether the police officer who fatally shot brown will be charged with his death. The National Guard was also activated.

The decision is expected by the end of the month.

“All of this alleging and weekly protesting is occurring without a single shred of credible evidence against Officer Darren Wilson as of now,” one UPenn student told Campus Reform. The student wished to remain anonymous.

SOUL is a new student group on campus with the purpose of being “a little more radical,” Moore said.

While the students have participated in “Ferguson Friday” every Friday since Oct., 3, The Daily Pennsylvanian, UPenn’s student newspaper, said many of the students on campus are “apathetic” as they pass by the display.