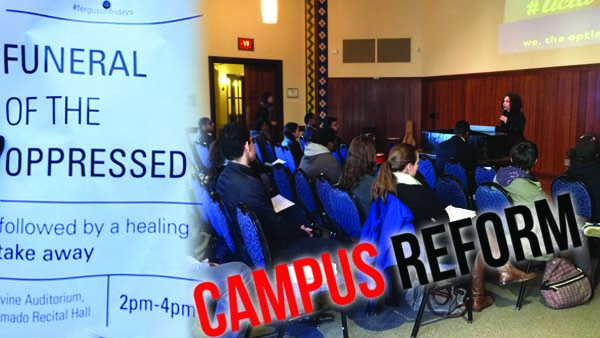 Ivy League students held a “funeral” for those “murdered by structural racism and capitalism” Friday afternoon in anticipation of the forthcoming verdict in Ferguson, Mo.

As a part of Ferguson Fridays at the University of Pennsylvania, a couple dozen students gathered for a mock wake of “black and brown bodies” who have been oppressed in the world. The students--with both minorities and Caucasians in attendance--congregated in front of a casket to hear personal anecdotes and poems, according to an attendee at the event.

“Students Organizing for Unity and Liberation (SOUL) presents a funeral for those casualties of crimes against humanity,” the event programs read. “Black and brown bodies murdered by structural racism and capitalism both domestically and globally.” 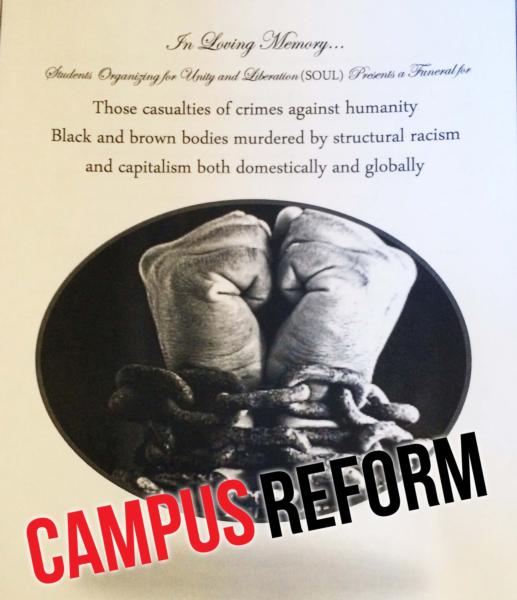 An attendee, who wished to remain anonymous, told Campus Reform that the group was “largely disorganized” and didn’t follow the schedule in the provided programs. Many students stood up to speak “about how they were brutalized by police,” the attendee said.

“It was so over-the-top for a standpoint that’s not even solidified,” the attendee said. “None of this would have been happening if Michael Brown hadn’t been killed, but we’re not even looking at the facts or evidence. They’re going through great lengths to make this display and not paying attention to what is actually going on. It just seems like a show.”

The funeral speakers lamented on a variety of topics spanning from immigration to Palestine to the Civil War. One speaker alleged that Americans had been misinformed about the true nature of the Civil War as it was really “about black bodies.”

After the speeches and poetry readings, each speaker would step down from the podium and immediately be ensnared in what students described as “solemn” hugs.

“It was very solemn,” an attendee told Campus Reform. “It felt like they were really mourning people they knew instead of these people in the media.”

After the speeches, the students marched single-file to the casket at the front of the room to pour water into a bucket--or pour libation--which was described as “African tradition.”

“I find the protests to be rather hyperbolic and disappointing,” a UPenn student, who wished to remain anonymous for fear of retribution from the group, told Campus Reform. “Instead of focusing on legitimate policy solutions or systematic legal reform, these individuals choose to focus on divisive demonstrations that are not constructive or building dialogue.”

Earlier this week, Gov. Jay Nixon (D-Mo.) issued a state of emergency for Missouri ahead of the grand jury decision which will determine the fate of Darren Wilson, the white police officer who fatally shot Brown in Ferguson. Since the shooting, riots have broken out in Ferguson and across the country.