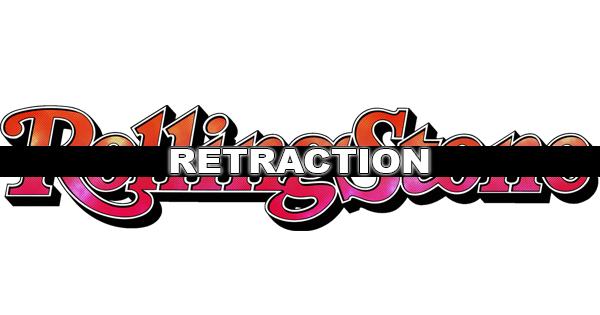 Almost a month after Rolling Stone published a harrowing piece on an alleged gang rape at the University of Virginia, the pop culture magazine has issued an apology and appears to backtrack its support of the article.

In a note to readers Friday afternoon, Rolling Stone blamed the UVA student, Jackie, for “discrepancies” in her story.

"I don’t know what to think. Do we write off Jackie’s story now? It just made everything so much worse for people who have and are going to experience similar ordeals."

“In the face of new information, there now appear to be discrepancies in Jackie's account, and we have come to the conclusion that our trust in her was misplaced,” Will Dana, Managing Editor of Rolling Stone, said in the note. “We were trying to be sensitive to the unfair shame and humiliation many women feel after a sexual assault and now regret the decision to not contact the alleged assaulters to get their account. We are taking this seriously and apologize to anyone who was affected by the story.”

However, Sabrina Rubin Erdely, author of the piece for Rolling Stone, has admitted to not questioning the student’s account of the fraternity men who allegedly raped her, and honored her request to not contact any of the men. Rolling Stone also said on Friday that Sean Woods, the editor of the piece, will remain with publication.

“Because of the sensitive nature of Jackie's story, we decided to honor her request not to contact the man she claimed orchestrated the attack on her nor any of the men she claimed participated in the attack for fear of retaliation against her,” Rolling Stone said.

“It’s such irresponsible journalism,” Arrianne Talma, a fourth-year global development studies major, told Campus Reform. “I don’t know what to think. Do we write off Jackie’s story now? It just made everything so much worse for people who have and are going to experience similar ordeals.”

Members of Phi Kappa Psi, the fraternity that those accused of gang raping Jackie allegedly belonged to, refuted the claim in their own statement on Friday. UVA shuttered its Greek life after the Rolling Stone article was published, and President Teresa Sullivan pledged to work harder to eliminate sexual assault on campus.

“It’s a very unfortunate situation and one that will be to the detriment of sexual assault survivors,” Talma told Campus Reform. “There is already so much fear and anxiety in coming forward after a sexual assault takes place, and something like this will only make it harder. In light of the Rolling Stone article and retraction, survivors will now be even more afraid to come forward because their credibility will be questioned.”

According to the Washington Post, Jackie, whose full name has not been published, stands by her story. Jackie alleges that after she went on a date with a Phi Kappa Psi member, she was gang raped at the fraternity’s party by seven men while two others watched.

“What bothers me is that so many people act like it didn’t happen,” Jackie told the Washington Post. “It’s my life. I have had to live with the fact that it happened every day for the last two years.”

Prior to Rolling Stone’s retraction, other news outlets that dared to question the credibility of the story faced intense scrutiny. Now those outlets, such as Jezebel, have had to issue apologies today as well.