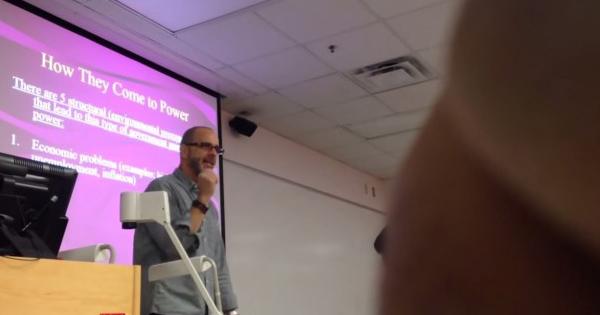 A Texas psychology professor was caught on video last month comparing the Tea Party to the Nazis.

Dr. Blake Armstrong, a South Texas College (STC) professor, told students not to tell anybody about his assertions; however an anonymous student who had enough of the professor’s anti-Republican rants decided to record the class on Nov. 17, as reported by The Blaze.

“In 1931, which was really interesting, the Nazis—people were kind of tired of them,” Armstrong says in the video. “They’ve been around since 1920, 11 years now. They’ve won seats—they’re like the Tea Party! That’s such a good example. Don’t tell anybody I said that though.”

The student whistleblower, who has chosen to remain anonymous, says the comments were the most “severe” coming from the professor; however, the student says it’s very easy to see [Armstrong] has a vendetta against Republicans and religion with an emphasis on Christianity.”

“This semester, [Dr. Armstrong] insulted Republicans about three times before this video was recorded,” the student told The Blaze. “On this day, he called Sen. Ted Cruz a bastard for using the last name 'Cruz' to win his election. I didn’t know exactly what he meant, but I decided to start recording.”

The student reportedly videotaped the class, claiming “it’s wrong for [Armstrong] to use his position as a soap box for his beliefs, especially with young, impressionable students.”

STC is a public community college located in the Rio South Texas region.