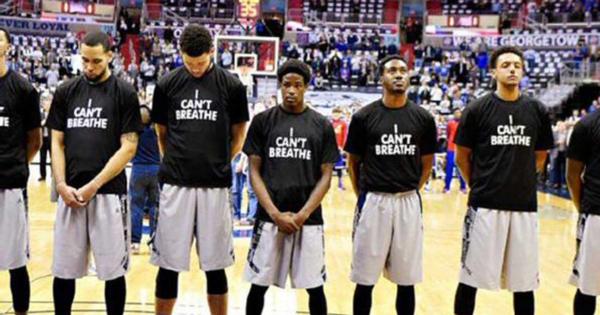 The team’s players and coaches made a collaborative decision to wear the t-shirts, black with white lettering, during yesterday’s nationally televised game at the Verizon Center in Washington, D.C. against 10th ranked Kansas.

“It’s something they wanted to do and after talking with them and understanding and making sure they understood the importance of what it means as opposed to let’s just do this, I agreed.”

The team’s t-shirts were nearly identical to those recently worn by NBA players LeBron James of the Cleveland Cavaliers and the Chicago Bulls’ Derrick Rose, during their pre-game warmups.

The team claims they are not accusing anyone.

“We didn’t wear the shirts to say that the cops were wrong or the system was wrong,” GU player Josh Smith told NBC Sports. “No matter how you look at it, we don’t know who was right or wrong but they still lost somebody and they won’t get that person back.”

“That was just the main reason why we wanted to wear the shirts, to say that we are aware of what is going on. We’re not choosing sides, we’re not saying one side is wrong, one side is right.”

The players initially came up with the idea after watching the Ferguson verdict during their trip Bahamas for the “Battle 4 Atlantis” tournament.

“We have had a lot of discussions and the emotions, as it relates to the protest that the guys wanted to do today and the emotions and the feelings in the locker room are all over the place, meaning not necessarily everyone feels the same way,” said GU’s head basketball coach John Thompson III.

“It’s something they wanted to do and after talking with them and understanding and making sure they understood the importance of what it means as opposed to let’s just do this, I agreed.”

GU did not respond to Campus Reform’s request for comment.