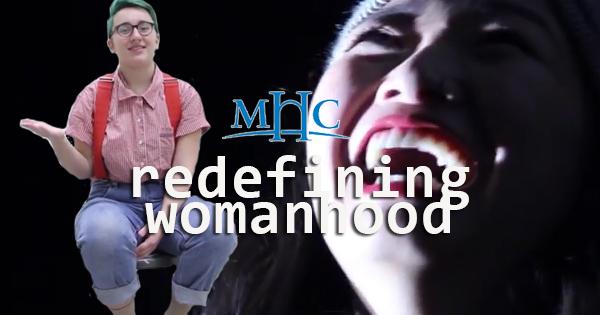 Students at Mount Holyoke have redefined “womanhood” for everyone who doesn’t understand "queer issues."

This week, students at MHC released an eight-minute long YouTube video titled “MHC Redefines Womanhood” to educate the college community on the the new transgender admissions policy that went into effect in September. The policy allows men who identify as women to attend the all-women’s college. As it stands now, the policy allows any student to seek admission to MHC that is “female or identifies as a woman.”

“I think womanhood is definitely beyond genitalia and this binary cisgender concept of womanhood where being a woman is directly correlated with having a vagina and whatever we call ‘female structures’.”

“I think womanhood is definitely beyond genitalia and this binary cisgender concept of womanhood where being a woman is directly correlated with having a vagina and whatever we call ‘female structures’,” Emma Podolsky, a freshman at MHC said in the video.

Podolsky, who later on in the video asserted that she is a “strong supporter” of the policy, made air quotes around the words “female structures.” She then criticized the college's “lack of spaces to have sort of mediated discussions,” which she said is “very disturbing.”

“I would say that a woman is anyone who chooses to identify as such,” sophomore Miri Stewart said in the video.

Kalyani Kannan, a first year student, said that “womenness” is less about a person’s gender and more about personal strength and courage. “To be a woman has a lot more to do with the personal strength that you find in yourself,” Kannan said.

“We acknowledge that gender identity is not reducible to the body and we are mindful that exclusion to the category of women based on contingent properties of birth is nothing new,” Pasquerella said during convocation.

The video primarily features supporters of the policy and highlights how they believe it will make the community “all-inclusive.” However, some MHC students are confused as to how an all-women’s college, which is inherently exclusive by nature, becomes all-inclusive just by admitting another small faction of the population.

Another anonymous student recalled how she was “shocked” and “scared” when she saw a man in the women’s restroom.

However, the majority of student contributors attribute opposition to the policy to misunderstandings and a lack of knowledge about “queer issues.”

“We don’t expect that everyone is going to agree with this policy, or even understand the policy,” Pasquerella said in the video.

“We’re particularly sensitive to the challenges around our commitment to diversity of all sorts,” Pasquerella continued. “We have a diverse religious community, we have individuals who are secular and have political views, who are for instance radical feminists and believe that anybody who has lived life as a biological male has a male privilege that attaches to that. And we also have conservatives who are politically opposed to people who are living a trans-lifestyle.”

Elizaveta Lozovaya, MHC’s Muslim chaplain, said the new transgender policy does not conflict with her worldviews as the world needs more “human understanding” with places where people can be themselves.

It is unclear if the video, produced and edited by a sophomore at MHC, was a class assignment. However, an MHC student who did not appear in the video and wished to remain anonymous for fear of retribution from her peers, told Campus Reform that the video was simply a “call to action.”