Kaitlyn Schallhorn and Yvonne Dean-Bailey Reporter at Fox News @K_Schallhorn on Jan 20, 2015 at 10:52 AM EDT 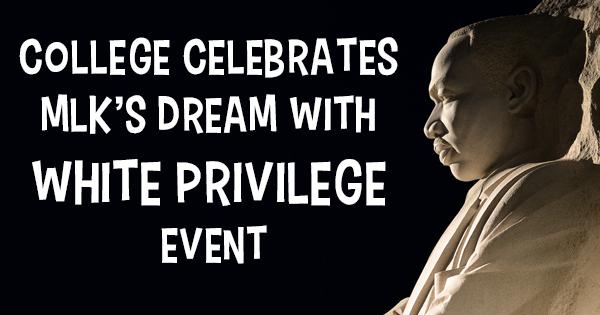 Martin Luther King, Jr.’s dream of a world where people are judged by the content of their character instead of the color of their skin is still just that at Mount Holyoke College—a dream.

The all-women’s college in Massachusetts celebrated Martin Luther King Jr., Day on Monday with a two-hour interactive event on “white privilege” and what “being white means post Ferguson.”

According to an email sent out to the student body from Mount Holyoke’s Office of Student Programs and obtained by Campus Reform, the event was facilitated by Elizabeth Thompson, an area coordinator for the school’s residential life, and Jessica Avery, a Mount Holyoke student. Both Thompson and Avery are white.

Monday’s event had student attendees develop their own definition of “white privilege,” according to a student who attended the event and wished to remain anonymous.

“White privilege is based off the fact that you look white—given that privilege is being white,” one student said at the gathering.

Other students claimed that white privilege means white people are wealthier and better educated because of the color of their skin.

Those in attendance were also required to fill out a variety of worksheets about their privilege including a “white privilege checklist,” a student in attendance told Campus Reform. 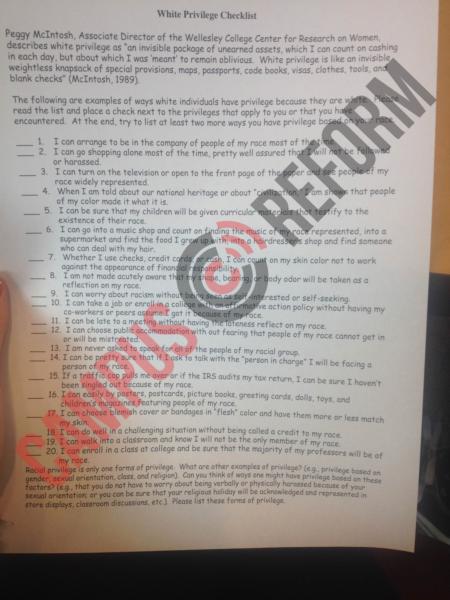 “All students were asked to acknowledge white privilege,” the student, who wished to remain anonymous for fear of retribution from her peers, told Campus Reform. “In a discussion it was mentioned that many liberal white people acknowledge white privilege and will protest with black people against it, but at the end of the day they cozy up in the luxurious houses and do nothing to actually help the problem.”

Monday’s discussion was a part of the school’s “ Taboo dialogues,” which are facilitated by Mount Holyoke’s Office of Residential Life, Student Programs, the Counseling Center, Eliot House, and the Dean of Students Marcella Hall.

According to Mount Holyoke’s website, Taboo is “[p]romoted as a healthy place to explore intellectual ideas as well as feelings about a topic while leaning into your own sometimes uncomfortable growing edges.” Students, faculty, and staff are invited to attend the dialogues.

Past dialogues have included topics such as: size positivity as a social justice issue, cisgender privilege, Asian families and sex, Latina sexuality, and the politics of smiling.

According to the Taboo website, students and faculty are encouraged to email the director of student programs, Kris Bergbom, to suggest a future topic.

At time of publication, 62 students had RSVP’d that they were attending on the event’s Facebook page.