Cal U. raises awareness for veteran suicides one push-up at a time 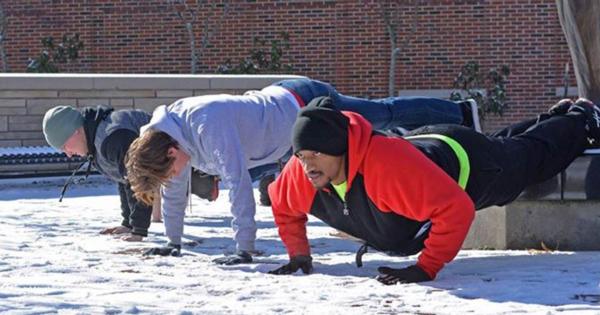 When the clock strikes 11:22 a.m., California University of Pennsylvania students aren’t thinking about lunch. From ROTC members to fraternity brothers, students from all around campus walk to the Quad, drop their bags, put their hands firmly on the freezing ground, and quietly complete 22 push-ups.

Cal U’s Office of Veterans Affairs and Veterans Club are raising awareness for veteran suicides by asking students to join ROTC and Veterans Club members every school day from Jan. 22 to Feb. 20 at 11:22 a.m. to complete 22 push-ups.

The event was created through a phone conversation between Robert Prah, director of Cal U’s Veterans Affairs and a Pennsylvania National Guard officer, and Staff Sgt. Jess Maund, a National Guard career counselor and assistant professor of military science.

“One of our priorities is suicide awareness,” Prah told Campus Reform. “We realized that Thursday would be Jan. 22 and that correlates with VA’s [Veterans Affairs] data regarding suicide rates. Plus, our campus has a common hour from 11:00 a.m. to 12:30 p.m. so we stuck with 11:22 for 22 days.”

Prah said many veterans have trouble reintegrating into society when they begin attending universities.

“Our Veterans Club provides a variety of resources for returning veterans,” he said. “Whether it is through peer-to-peer mentors or our Veterans Club, we all work together to help each other out.”

While on the first day of the event, 22 students completed 22 push-ups, that number has varied between 15 and 30 participants throughout the first week, with some students who take classes online participating remotely.

According to Prah, the veterans office on campus has not dealt with any suicide issues. Cal U has more than 100 veterans on campus.

“Our goal for the 22 Push-ups in 22 Days is to bring our veterans, service members, students, and campus community together and continue to raise awareness,” Prah said. “It is important because when someone suicides, it affects us all. It may affect your family, friends, classmates, a team or organization and much more.”