Fundraiser for Palestinian terrorist to be held at DePaul 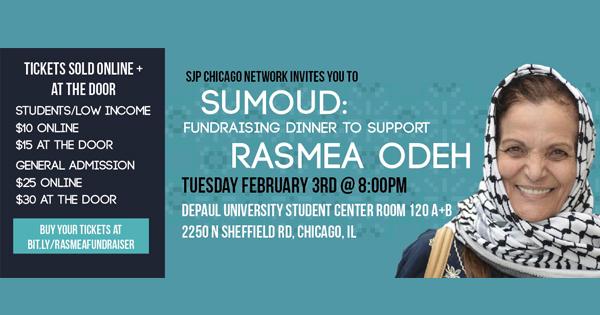 A DePaul University student group is set to fundraise for a Palestinian terrorist facing deportation after she was convicted of immigration fraud this past November.

Students for Justice in Palestine (SJP) is carrying out the fundraiser tomorrow evening for a former organizer for the Popular Front for the Liberation of Palestine, Rasmea Yousef Odeh.

Rasmea Yousef Odeh was convicted in Israel in 1970 for two terrorist attacks: a supermarket bombing that killed two students and an attempt four days later to blow up the British Consulate.

The page for the event, hosted by the Chicago chapter of Students for Justice in Palestine (SJP), says the fundraiser will include “a comedy performance from Amer Zahr, spoken word and dance performances, and a speech from Rasmea’s defense committee.”

According to the site, “[a]ll proceeds from the fundraiser will go to Rasmea’s legal defense fund.”

SJP Chicago says Odeh is a 67-year-old Palestinian community leader in Chicago who “was indicted for allegedly falsifying information on her immigration papers.”

But Odeh’s history is apparently a bit more colorful than that.

Rasmea Yousef Odeh was convicted in Israel in 1970 for two terrorist attacks: a supermarket bombing that killed two students and an attempt four days later to blow up the British Consulate.

Because of her alleged involvement, Odeh was convicted by an Israeli court and sentenced to life in prison, only to be released in 1980 in a prisoner exchange with the Popular Front for the Liberation of Palestine.

Odeh then began immigration efforts to become a U.S. citizen. Odeh first applied to enter the U.S. from Jordan in 1995 and became a naturalized citizen in 2004. In the process, Odeh answered “no” to a question querying if she had ever been charged, convicted, or imprisoned.

Odeh was arrested on October 22, 2013 on immigration charges for allegedly lying about her involvement in the 1969 terrorist attacks and the subsequent conviction and imprisonment.

Breitbart reports that a federal jury found Odeh guilty of illegally obtaining naturalization in November of last year. She is scheduled to be sentenced on March 10 and faces imprisonment or deportation.

SJP Chicago derides the trial as “unfair” because “the core of her defense was not allowed to be presented in court, including evidence of her rape, torture, and PTSD.”

In a press release Monday morning, The American Jewish Committee (AJC) castigated Students for Justice (SJP) and their fundraising efforts.

“SJP already has demonstrated its hostility towards Israel with its active promotion on university campuses of the BDS movement against Israel,” said Director of AJC’s Chicago Region Director Amy Stoken.

“Now, the SJP Chapter at DePaul has taken another egregious step by supporting a convicted Palestinian terrorist. Both support for BDS and for Odeh are counterproductive to efforts to achieve Israeli-Palestinian peace.”