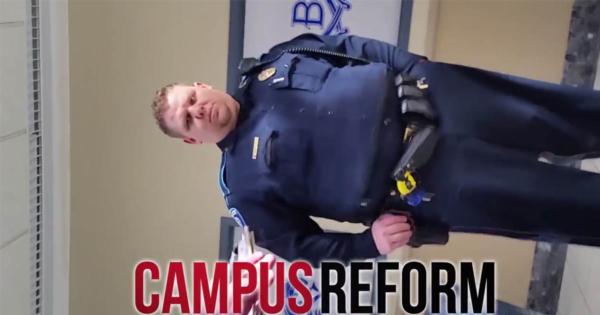 School administrators and campus police at Blinn College threatened to kick a student off campus for trying to sign up her peers for a new conservative club.

Nicole Sanders, a sophomore at Blinn, was only outside on her school’s public campus for a little more than an hour holding two signs and informing others about the new Young Americans for Liberty club she is attempting to start. One sign read “Lol” with the Obama campaign logo replacing the “o” and the other sign said “defend your gun rights on campus,” which seemed to draw the ire of a school administrator.

“Gun rights on campus?” Sherri Rich, a Student Leadership & Activities (SLA) assistant, told Sanders in a video obtained by Campus Reform. “Hey, I’m not against guns, okay? But on campus, I’m not so sure.”

Although Sanders was in the school’s designated free speech zone, Rich told the student and her friend that they would be prohibited from continuing their efforts to sign other students up unless they got permission.

Rich did not approach Sanders until she had finished talking with students outside and was relaxing inside the student center with her friend. Campus police accompanied Rich when she talked with Sanders.

“We just don’t allow it,” Rich said, unable to cite a school policy that would prohibit Sanders’s action. “You have to come and get special permission.”

Rich also wrongly told the student that Blinn, located in Brenham, Texas, is a private school.

“It’s a private college actually, it’s a community college,” she can be heard saying on the video.

Sanders told Campus Reform that students always engage in conversations while walking to and from class and the campus police presence was unnecessary.

“I don’t understand why it’s such an issue to stand outside and talk to kids,” Sanders said.

In a voicemail to Campus Reform, Jeff Tilley, Blinn’s marketing and communications director, said Sanders just “jumped the gun a little bit” and the college’s policies are all “just standard operational procedures.”

“Sounds like the gist of what happened is a student kind of set up shop, and we have policies and procedures that basically all they have to do is apply for a group,” Tilley said.

Tilley also said in an email that he was told Sanders was inside the student center when she was trying to sign up students which Sanders disputed. In a video obtained by Campus Reform, Rich told Sanders and her friend that they could not sign students up outside because they’re “still on Blinn College campus.”

Tilley said that Sanders’ YAL club was approved by the school later on in the week.