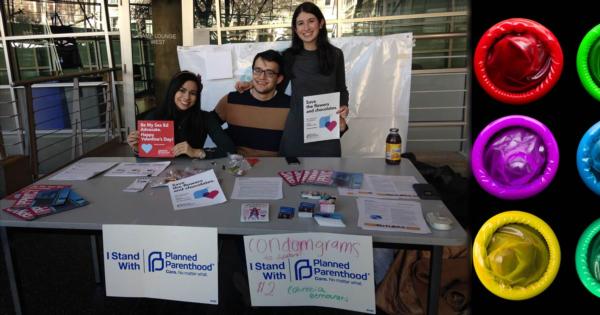 With Valentine’s Day right around the corner, Columbia University students are on the lookout for “condomgram fairies” who deliver condom Valentine’s around the New York campus.

It’s a tradition for Columbia’s College Democrats to raise awareness for Planned Parenthood around Valentine’s Day by selling what they call “condomgrams”—condoms and candy packaged together. Students can purchase the specialty Valentines for $2, and the College Dems will deliver anywhere on campus.

"Basically we get a condom, a blow-pop, extremely suggestive as it sounds, and miscellaneous candies and we make a Valentine-gram out of them and we deliver them on Valentine’s Day."

According to Melissa Quintana, a junior at Columbia and a member of the College Dems, students may purchase the condomgrams anonymously and even send them to their TAs.

“Basically we get a condom, a blow-pop, extremely suggestive as it sounds, and miscellaneous candies and we make a Valentine-gram out of them and we deliver them on Valentine’s Day,” Quintana told Campus Reform in an interview. “And all proceeds, like everything that we make we put forth the money for materials, we donate it to Planned Parenthood, which we think is a fantastic cause that not only promotes just access to health care in general for women and men, but just reproductive justice in general which we think is an amazing cause and something that we believe in really heavily as well.”

Quintana said the College Dems, who were tabling in a student center Wednesday afternoon, are encouraging students to include a “fun, activist pick-up line” with their condomgrams, such as “hey girl, how about this Valentine’s I make you a sandwich,” or “together we can be the 100 percent.”

The Columbia junior told Campus Reform that students send condomgrams to their TAs “all the time” because “they know where their office is or where they live.”

But besides the condomgrams, Quintana said that the student group was also passing out literature and information on Planned Parenthood, especially in regards to the pro-abortion group’s push for mandatory sexual education for students K-12.

“It’s a really cool initiative that Planned Parenthood is doing and we’re encouraging people with a cool photo campaign,” she told Campus Reform.

The College Dems plan to sell the condomgrams throughout the rest of the week and will deliver the treats on Valentine’s Day.

“We make a few hundred dollars every year, and it’s a great cause, and so we’re really excited to be a part of it,” Quintana said. “People love selling them, buying them, delivering them is a lot of fun and all sorts of awkward in the hallway, but they’re condomgram fairies.”

Also on Wednesday, Columbia officially announced the mandatory sexual respect education program that all students will be required to participate in before registering for classes in March or receiving diplomas.