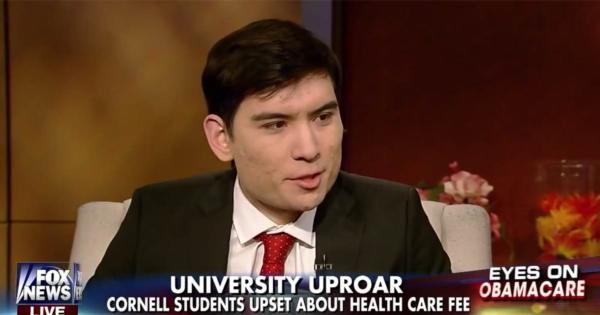 Students at Cornell are outraged over a new fee the university is imposing on those who opt out of the school’s health care plan.

As previously reported by Campus Reform, the Ivy school announced that it would begin charging students who do not receive the school’s health care plan—whether the students already have insurance or not—a $350 fee. As this is a fee and not a tuition increase, students’ financial aid will not cover the new cost.

Casey Breznick, editor-in-chief of the Cornell Review, appeared on Fox News over the weekend to discuss the new fee.

“And these same students, who you just said vote Democrat party line, who support these big government, progressive policies, when it finally comes down to their pocketbooks or their wallets or their families’ wallets, they’re all of a sudden in an outroar, they’re occupying the administrators’ buildings, taunting and screaming at the president,” Breznick said.

This is Cornell President David Skorton’s final semester at the school before he heads to Washington, D.C., to take a position as secretary at the Smithsonian Institution.