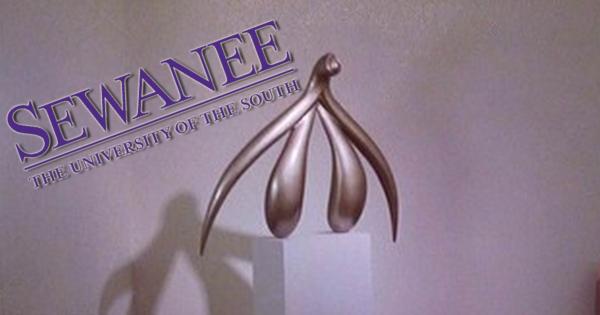 Sewanee: The University of the South will unveil a giant golden clitoris statue that will reside in the school’s library with a luncheon and reception this afternoon.

From Feb., 25 to March 11, a giant golden clitoris sculpture will be on display in Sewanee’s library to promote feminist artist Sophia Wallace’s “CLITERACY” project. Sewanee’s Women’s Center has promoted the event on social media with hashtags such as #SolidGoldClit and #yeaSEWANEEScliterate.

“By occupying public space with information about women’s bodies, CLITERACY destigmatizes the information itself, facilitating open dialogue,” the event description states. “Wallace’s work reveals the “phallic as neutral” bias in science, law, philosophy, politics, mainstream and even feminist discussion, and the art world. Her art will be displayed in DuPont Library as a means of mirroring the cultural silence surrounding issues of female sexuality in today’s world as well as throughout history.”

“We hope that by bringing Wallace and her artistic vision to Sewanee, we can encourage more in depth, healthy conversations about female sexuality, sexual violence on campus, as well as a myriad of other topics to stimulate growth.”

Wallace has promoted her work and project, which is called “Democracy without cliteracy? Phallusy,” across the country with her sculpture and other art installations.

The giant golden clitoris is also a part of Wallace’s “clit rodeo,” an event where participants can take turns riding a mechanical clit instead of a bull.

"It's appalling and shocking to think that scientifically, the clitoris was only discovered in 1998," Wallace told The Huffington Post in 2013. "But really, it may as well have never been discovered at all because there's still such ignorance when it comes to the female body."

Sewanee’s Bairnwick Women’s Center is hosting Wallace’s art project. According to its website, the Women’s Center is a student-led movement that seeks to foster the community, encourage conversation, provide a platform for students, demand change to eradicate sexism and homophobia, and serve as a community resource.

‌"The Women’s Center is the home to a student-led movement actively promoting equality and social justice through education, support, and mentorship in Sewanee and beyond,” the website states. “We seek to celebrate and challenge gender and sexuality in our community.”

Michelle Howell, a Sewanee senior anthropology major and co-director of the Women’s Center, told Campus Reform in a text message that she was “very excited to engage in dialogue with [Campus Reform],” but questions regarding funding went unanswered.

Howell said she was “a little busy” with the event.

Laurie Saxton, director of media relations for Sewanee told Campus Reform that the event was sponsored by the Women's Center which is funded in part by the Dean of Students' budget and in part from the Activities Funding Committee (AFC), a student organization that works with the Dean of Student Organizations to distribute funding among the school's student groups.

Benjamin Sadler, a Sewanee student, encouraged people on Facebook to attend the event and talk about it.

Sewanee, located in Tenn., is a private liberal arts school affiliated with the Episcopal Church.

Wallace did not return a request for comment from Campus Reform.