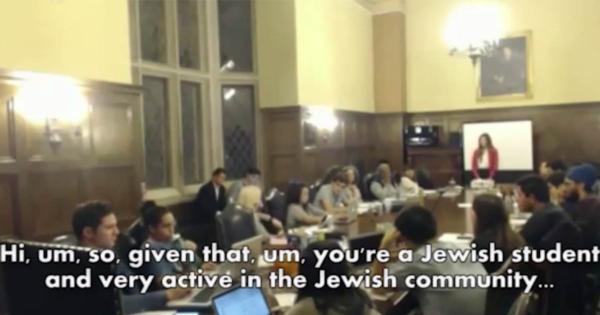 A new video showing the University of California—Los Angeles’ (UCLA) Undergraduate Student Association Council (USAC) grilling a student about her Jewish identity has ignited a controversy on campus.

UCLA sophomore Rachel Beyda appeared before USAC in early February to discuss her candidacy for a seat on the university’s judicial council. During the meeting, Beyda was asked if her association with Jewish student organizations would impact her ability to perform the duties of the position.

“Given that you are a Jewish student and very active in the Jewish community, how do you see yourself being able to maintain an unbiased view?” one unidentified student asked Beyda.

Beyda was then asked to leave the room so the council could deliberate her appointment. During the discussion that followed, a number of students questioned Beyda’s Jewish background.

“I definitely can see she’s qualified for sure, I just worry about her affiliations obviously,” said one student board member, followed by another who said “...even if she is talented, even if she is the right person for the job I just don’t see her as being [inaudible].”

“What followed was a disgusting 40 minutes of what can only be described as unequivocal anti-Semitism during which some of our council members resorted to some of the oldest accusations against Jews, including divided loyalties and dishonesty,” Beyda’s roommate and fellow UCLA student, Rachel Frenlak, wrote in an op-ed for the Daily Bruin.

Beyda was originally denied the position following the Student Association’s discussion. However, the council voted unanimously to approve her appointment after Debra Geller, UCLA’s Executive Director of Community Standards, condemned the students’ reasons for dismissing Beyda as a viable appointee.

USAC President Avinoam Baral said the discussion that took place after Beyda was asked to leave the room was “really discriminatory in nature,” according to a report by CBS Los Angeles.

Baral can be overheard in the video saying he is witnessing “someone potentially being denied a position because they are Jewish.”

The four students accused of anti-Semitic behavior later issued a written apology, claiming their intentions “were never to attack, insult or delegitimize the identity of an individual or people.”

“As individuals committed to social activism and advocating on behalf of underrepresented communities, we understand the importance and urgency of wearing our identities as a badge of honor,” wrote Sofia Moreno Haq, Negeen Sadeghi-Movahed, Manjot Singh, and Fabienne Roth. “Thus we ask the Jewish community to accept our sincerest apology for remarks made during the Feb. 10 Undergraduate Students Association Council meeting concerning the potential Judicial Board appointee.”

However, according to three UCLA professors, the students’ apology is “woefully inadequate.”

“Were USAC a federal, state or local government body, its discussion and initial vote concerning Beyda’s appointment would violate Article VI of the U.S. Constitution,” they wrote, adding that “[a] close analog would be if the U.S. Senate voted against confirming a Supreme Court nominee because of her religion.”

UCLA students and the university itself have been the subject of numerous allegations involving anti-Semitism on campus.

According to a 2014 study released by the AMCHA Initiative—a nonprofit organization dedicated to combatting anti-semitism in higher education—of the 28 Israel-related events hosted by UCLA’s Center for Near East Studies between 2011 and 2013, 93 percent were anti-Israel with “75 [percent] displaying antisemitic discourse.”

“For myself and other Jewish and pro-Israel students, the atmosphere is poisonous. We feel attacked, ostracized, and threatened. Our identities are being rejected and our right to express our beliefs endangered,” Tessa Nath, a senior at UCLA, wrote last June in an op-ed for The Tower, an online news source covering Israel and the Middle East.