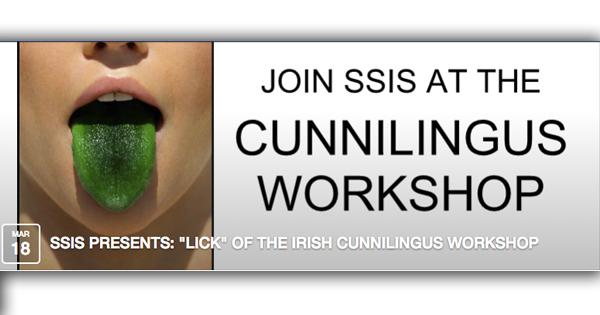 Brandeis University students are getting lucky this week as the school celebrates St. Patrick’s Day with a female oral sex workshop.

“[W]ith our help, you will master the lick of the Irish, just in time for St. Patty's day,”

Hosted by the school’s Student Sexuality Information Service (SSIS), the workshop will be held on campus and is listed as a “tasting” on its public Facebook event page.

SSIS is a student group at Brandeis that claims to “cultivate a safe, sex-positive community while satisfying every Brandeisian’s sexual health needs,” according to its website. The student group offers peer counseling as well as “sexploration products.”

At time of publication, only 49 guests had RSVP’d that they would attend the workshop. More than 280 other guests had been invited.

“St. Patrick did not kick the snakes out of Ireland for this,” one Brandeis student told Campus Reform in an interview. The senior, who wished to remain anonymous for fear of retribution from peers, was referring to the common Catholic teaching that the missionary expelled all snakes from Ireland.

“I don’t think that miracle had happened so people could learn how to orally pleasure a woman,” the student added.

The Brandeis undergraduate was offended by the event’s tie to a religious holiday, according to the student’s interview with Campus Reform. The student said the event would be less offensive if it wasn’t tied to the Christian holiday or didn’t use students’ tuition dollars to host the event.

“This is an absolutely horrid waste of our tuition dollars, but also our tax dollars because Brandeis accepts financial aid from the state,” the student said. “I think it is extremely lewd.”

According to a Brandeis treasurers PowerPoint, obtained by Campus Reform, SSIS is considered one of the eight “secured” student clubs on campus, which means that it provides a “service” to the student population.

“Secured clubs are specifically mentioned in the Student Union Constitution,” the Department of Student Activities website states. “They are a special class of clubs that cannot be de-chartered and that receive a fixed amount of the Student Activities Fee each semester. Secured clubs can only be created and removed by a constitutional amendment and are generally derived from existing chartered clubs.”

SSIS did not respond to a request for comment from Campus Reform.

Brandeis, founded as a Jewish institution in 1948, is located in Waltham, Mass. It’s motto—which is in Hebrew—says “truth even unto its innermost parts.”

The archery club at Brandeis is also sponsoring an event to celebrate the Irish’s religious and cultural holiday. On March 22, the archery club will host the Shamrock Shoot, a USA Archery indoor event.

Brandeis did not respond to a request for comment from Campus Reform.