Student newspaper ‘crass rant’: 'There are too many babies' 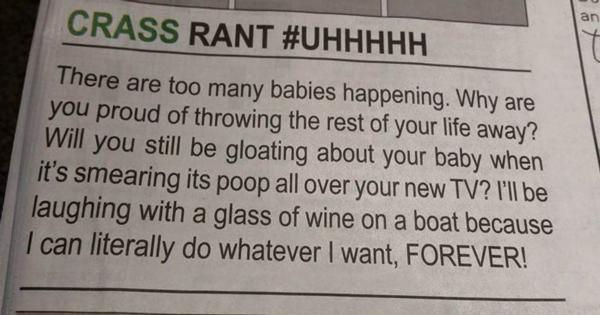 A blurb in Eastern Michigan University's student publication claimed that there are too many pregnancies and made fun of parents.

“There are too many babies happening,” the post reads. “Why are you proud of throwing the rest of your life away? Will you still be gloating about your baby when it’s smearing its poop all over your new TV? I’ll be laughing with a glass of wine on a boat because I can literally do whatever I want, FOREVER!”

“I’ll be laughing with a glass of wine on a boat because I can literally do whatever I want, FOREVER!”

The short editorial appeared under the “Crass Rant #UHHHHH” headline on the comics section of the Eastern Echo Newspaper, EMU’s student newspaper. Christine “Crass” Deneweth is the comics editor, according to the Echo’s website.

Katie Perrotta, a junior communication major at EMU, told Campus Reform in an interview Tuesday afternoon that she shocked to see the blurb when she picked up the newspaper.

“Seeing that this morning was kind of shocking,” Perrotta said. “I was very stunned at how insensitive it was or how close-minded it was to the big picture of what children are all about.”

Perrotta, who is the president of the Eastern Michigan Students for Life chapter, said that the Crass Rant in the biweekly publication is nothing new. She said that in the past the one-sided rant has been about equality in pay for women and decrying the lack of parking on campus.

She said that she plans to write a “rebuttal” in a letter to the editor for the Echo to show that “women can be empowered by making life-affirming choices.”

“Using an ability that men don’t have for women to be able to be proud of, that is something that can empower women,” Perrotta said.

“For her to criticize and judge other peoples’ choices was hypocritical and close-minded,” she said.

“Outlandish and disrespectful comments like this published in university-targeted papers demonstrate why powerful pro-life presences on campus, like Eastern Michigan Students for Life, are so important,” R.J. McVeigh, the Great Lakes regional coordinator for Students for Life of America, told Campus Reform. “They work to create a counter-culture where human beings are welcomed and where students don't have to choose between being a parent and having a bright future.”

Eastern Michigan Students for Life is just one of the 130 groups McVeigh works with in Michigan, Indiana, and Ohio.

Perrotta said she picks up the Echo every time it comes out to check on the coverage her student group gets. Since she’s been the Eastern Michigan Students for Life president, the coverage of the organization has been “fair and just,” she said.

Deneweth did not respond to a request for comment from Campus Reform in time of publication.

EMU is a public university in Ypsilanti, Michigan with more than 18,000 students enrolled.