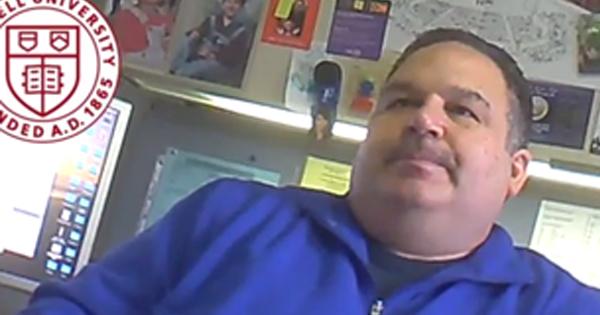 Cornell University’s assistant dean of students agreed to allow an ISIS student group on campus, and would allow them to bring a “freedom fighter” to campus to conduct trainings for students.

In the video released Wednesday by Project Veritas, an undercover reporter disguised as a potential student from Morocco, told Joseph Scaffido that he wanted to start a “humanitarian group that supports distressed communities, a humanitarian group in the Middle East, northern Iraq, and Syria” if he did decide to attend the Ivy school.

“Maybe you know get a group that educates on the Islamic State in Iraq and Syria and just educate people, maybe bring them in,” the undercover journalist said.

“And I think programs like that really do have a good place here at Cornell,” Scaffido said in the video about the possibility of starting the group.

The undercover journalist asked if it would be possible to bring a freedom fighter to campus to “do like a training campus for students.”

“You would be allowed to do something like that. It’s just like bringing in a coach, to do a training on a sports team or something,” Scaffido said.

The undercover videographer also asked Scaffido if the group could send care packages of food, water, and electronics to the freedom fighters and their families and asked if it would be a problem if the student group supported Hamas.

“The university is not going to look at different groups and say you’re not allowed to support that group because we don’t believe in them or something like that,” Scaffido said in the video. “I think it’s just the opposite. I think the university wants the entire community to understand what’s going on in all parts of the world.”

“I don’t know if you’ve talked to many people about it, it’s very liberal, the community is a very liberal community,” he also said of the private school and Ithaca, New York, the city where the Ivy League university resides.

Scaffido told the undercover journalist about Cornell’s resources for students groups, such as funding to bring speakers to the school and buildings on campus which can host more than 1,000 students for events.

Casey Breznick, a student at Cornell and editor of the Cornell Review, the school’s conservative student publication, told Campus Reform that as of Wednesday morning students on campus were abuzz about the Project Veritas video and were critical of the muckraking journalism.

“But ignorance, apathy, and lack of alertness are no excuses here,” Breznick, a sophomore, said. “I suspect part of the outrage over this video from liberal students on campus stems from Scaffido's admission that Ithaca is a very liberal town, and their panicky reaction to make sure no one associates Ithaca liberalism with Scaffido's apparent lax attitude towards terrorist organizations.”

“At the very best, Scaffido was sleeping on the job. At the very worst, he’s so inculcated by political correctness he can’t bring himself to deny this ‘student’s’ outrageous request,” Breznick said. “For the record, I nor anyone at The Cornell Review thinks Assistant Dean Scaffido actually supports ISIS or Hamas. He's just clueless or apathetic."

In a statement provided to Campus Reform, Cornell's president, David. J. Skorton, called the "notion" that Cornell would allow for ISIS trainings on campus "ludicrous and absolutely offensive."

"Project Veritas, the organization behind this shoddy piece of 'journalism' has been repeatedly vilified for dishonest, deceitful activity," Skorton said in the emailed statement. "It is shameful that any individual would pose as a student facing racial discrimination at another university, ask leading questions on a hidden camera about Cornell's tolerance for differing viewpoints and backgrounds, and then conveniently splice together the resulting footage to smear our assistant dean and our University. After speaking with Assistant Dean Scaffido, I am convinced that he was not aware of what he was being asked."

"Let me be clear: Cornell has an unwavering commitment to the free and responsible exchange of ideas," Skorton also said. "However, we remain vigilant in maintaining an appropriate balance of freedom of expression within accepted boundaries. Of course, incitement to violence is not protected and would never be tolerated on our campus."

The Project Veritas video referenced OpentheBooks.com and said “Cornell University has received over $300 million in federal contracts and grants since 2000 and more than $190 million from New York state taxpayers since 2012.”

According to its website, Project Veritas aims to “investigate and expose corruption, dishonesty, self-dealing, waste, fraud, and other misconduct in both public and private institutions in order to achieve a more ethical and transparent society.”