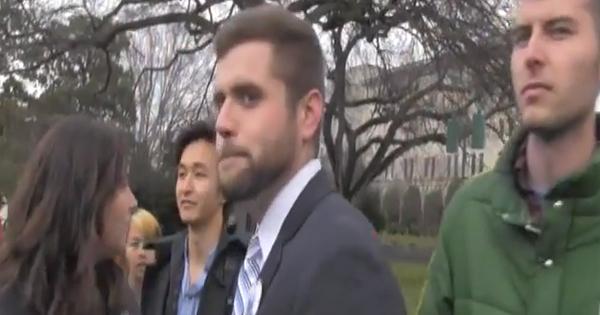 Three USSA staffers followed Campus Reform reporter Kaitlyn Schallhorn and Campus Correspondent Gabriella Morrongiello around the “Stop the #RaidOnStudentAid” rally last Friday. The staffers repeatedly blocked Schallhorn’s attempts to interview students by standing in front of them or directly telling students not to engage the journalists in conversation.

USSA Legislative Director Justin Habler refused to condemn his colleague’s behavior when confronted about the situation.

“We’re members of the media and we’re trying to get students’ voices out there and we have two men continuously standing in front of students blocking our questions,” Morrongiello told Haber. “You say you haven’t told your staff members to do that, why are they feeling the need to do that?”

“Oh, well that’s their choice. I can’t tell them what to do,” Habler responded.

“Are you not the superior to these people who have been blocking us?” Morrongiello asked.

According to a press release sent to Campus Reform by USSA organizers, the rally was an opportunity for students to “speak out” against the recent budget proposal by House Republicans which includes cuts to federal Pell Grants.

Schallhorn and Morrongiello did not observe organizers obstructing other news outlets from speaking to students during the rally.