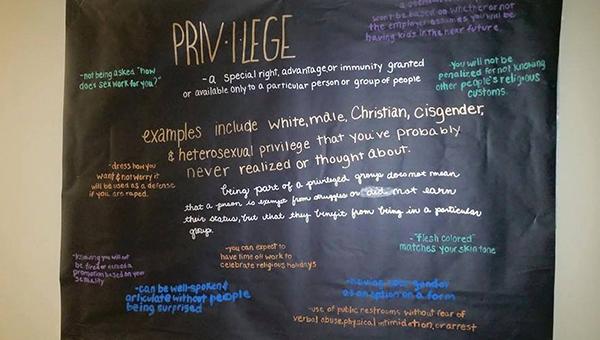 Privilege posters in residence halls are crossing state lines with the latest hanging in a freshman dorm at Marshall University.

Much like the bulletin boards at Appalachian State University in North Carolina, the poster at the West Virginia university defines privilege as “a special right, advantage, or immunity granted or available only to a particular person or group of people,” according to the photo obtained exclusively by Campus Reform.

The handwritten poster also defines privilege as “not being asked ‘how does sex work for you?’” and “‘flesh colored’ matches your skin tone.”

“Examples include white, male, Christian, cisgender, and heterosexual privilege that you’ve probably never realized or thought about,” the poster says. 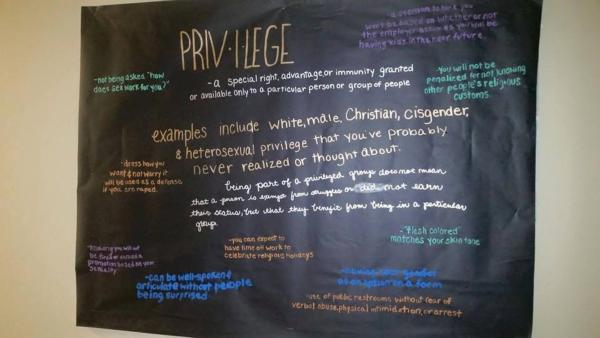 “A decision to hire you won’t be based on whether or not the employer assumes you will be having kids in the near future,” the poster identifies as one type of “privilege.”

“You will not be penalized for not knowing other people’s religious customs,” the poster reads.

The poster was hung in Freshman North, a co-ed dorm at Marshall for first-year students, by Jessie Swiger.

According to a screenshot sent to Campus Reform by a student who wished to remain anonymous, Swiger, a senior at Marshall, bragged about her “last bulletin board” on her Facebook page. 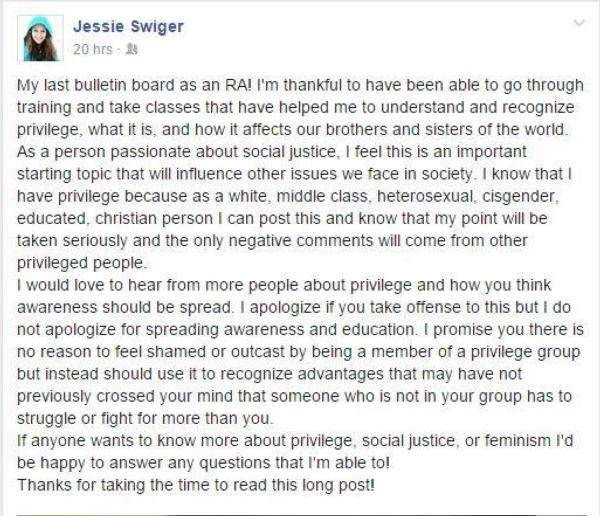 “Well honestly, while I understand that not everyone comes from the same backgrounds, we are all supposed to be intellectual equals, and this creates a situation that ostracizes individuals,” a student who lives on the floor told Campus Reform anonymously, adding that the RA “shouldn’t be trying to divide us.”

“My opinion is rather than accusing others for being provided something with little to no effort due to categorizing them by a trait, focus on building your own success,” Jenna Adkins, a freshman at Marshall, told Campus Reform. “You can’t control your life and what you obtain. The true concept of ‘privilege’ is simply a bad attitude because somebody has something you don’t.”

Adkins does not live on Swiger’s floor.

In additional screenshots provided to Campus Reform, Swiger argued for the importance of privilege boards, especially those at Appalachian State University in North Carolina, as previously reported on by Campus Reform.

“The role of an RA is to educate residents on issues that help them to become positive members of the university and world,” Swiger wrote in reference to the App State privilege boards. “Understanding what comes from privilege is part of that.” 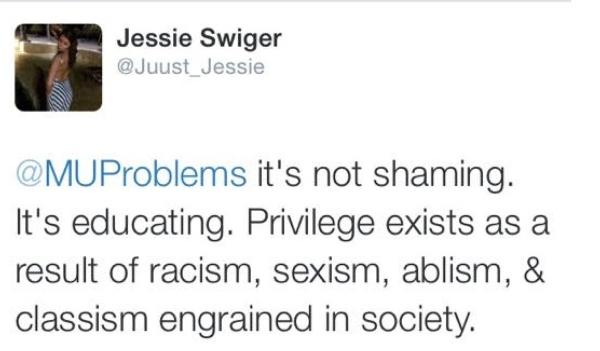 According to Marshall’s website, RA’s have the “opportunity to work with diverse groups of students and hold a premiere student leadership position on-campus.”

“I will let you know when and if I am able to speak to you once I receive more information. Thank you,” Swiger told Campus Reform in a Facebook message.

At time of publication, Swiger had yet to respond to multiple requests for an interview from Campus Reform.

Marshall is a public research university in Huntington, W.V., with more than 13,000 students enrolled.