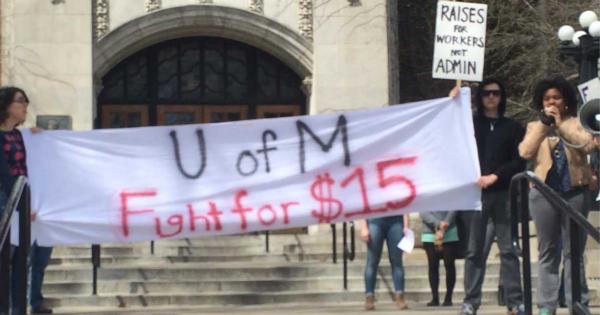 Chanting ‘end corporate greed,’ a group of about 50 demonstrators demanded that the University of Michigan, a public institution, increase the minimum wage and recognize a student worker union.

The protest was part of a “Fight for $15” on April 15, a nationwide protest for higher minimum wage and union protections.

Pay all employees a minimum wage of $15 per hour

—Will recognize and bargain with a student worker association

One participant held a sign that listed “environmental justice” as a concern at the minimum wage protest.

“People don’t think too often about how affordable this change is,” undecided freshman and rally participant Nathan Malonis said, regarding a minimum wage increase.

“I’m not positive where that figure came from. I think that comes from a number of studies where it’s shown that $15 is a functional wage to be able to live a remotely comfortable life,” he said.

When asked why not make the minimum wage higher than $15, Malonis said “I don’t know the answer to that question.”

“Obviously you can’t be a starry eyed dreamer and ask for $50,” said Malonis.

A Facebook event page promoting the event was created by “The Harbinger,” which is not recognized as a student organization at the university. The long description on the group’s Facebook page describes the Student Socialist Union and says that the Harbinger is their publication.

The Student Socialist Union is registered by the Center for Campus Involvement as a student organization at the university. The members of the Student Socialist Union describe themselves as “a radical group of students from a variety of left viewpoints, united by our opposition to capitalism” on their official profile found on the university’s student organization directory.

Malonis said a number of students and community members beyond the group participated in organizing the protest. He said that he attended a planning meeting “early on when we decided to have this demonstration.”

Malonis said that a student union would be a “solid foundation for organization” and that he has attended SSU meetings “on and off.” He said that “maybe half” of the protesters present at the time of the interview were involved in SSU “in some way.”

The highly organized protest started at noon and lasted about an hour. Participants walked to several buildings on campus, stopping to chant their demands. A group of about 15 protesters went inside a campus building and said that they delivered a list of demands to university officials.

Blair Ellis, an alumnus, said in a speech that they “explained to them that we are doing this politely this time. We are not trying to come in there to cause a ruckus…but that is not going to be true next time. So be ready for that,” to cheers from the crowd.

Ian Robinson, a lecturer at the university and president of the Huron Valley Central Labor Council (HVCLC), gave a brief speech at the protest. According to the HVCLC website, “Central Labor Councils are the regional level of the American Federation of Labor-Congress of Industrial Organizations (AFL-CIO).

“I have been keeping the council informed about these plans for April 15th and the Fight for $15 movement more generally. I would say almost everybody on the council is strongly supportive of this because we realize you can’t really have a labor movement that’s just comprised of unions when unions only represent 10%....of the workers,” said Robinson.

“If we had just kept up our minimum wage with inflation...from its high point in real dollar terms back in the late ‘60s, we’d be at about $18 dollars an hour minimum wage,” said Robinson.

Kalyn Sanderfer, a LSA senior and employee at University HealthServices, encouraged students to join the rally in an opinion piece published by the Michigan Daily on April 13. The soon-to-be graduate student at the university wrote that “starting an undergraduate worker’s association and raising the minimum wage for all University employees” is the “first step for a living wage” in Michigan.

“I have worked at my job for two years, going into my third, and with my family’s income and my position as a full-time graduate student, I think I should be paid at least $14,” wrote Sanderfer.

Members of the Young Americans for Liberty (YAL) at the University of Michigan organized a counter protest, arguing that the economic effects of a minimum wage increase could serve to harm the employment prospects of low-wage workers.

“We are out here because a $15 minimum wage is anti-commonsense,” said Kayla Garthus, president of YAL at the university, who added that her first job paid $7.25 an hour.

Christopher Burtraw, a University of Michigan student who joined the counterprotest, said that he struggled as a teenager to find employment, eventually taking a job “under the table” because the available minimum wage positions were taken by more experienced adults.

“Higher minimum wages take away opportunities from teenagers to start their experience. They are not concerned with how much they are making, they are concerned about getting something on their resume,” said Burtraw.