Mariana Barillas News Producer at Sinclair's The National Desk @mvbarillas on May 14, 2015 at 3:34 PM EDT 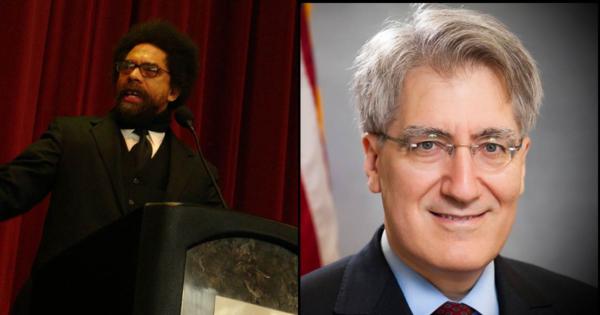 At a dialogue late last month discussing disagreeing with civility in the public sphere, conservative intellectual Robert P. George and leftist intellectual Cornel West both agreed that universities should not be intellectually “safe spaces.”

“All I can tell you is if you are a student and you are looking for a safe space, don’t come to the classroom where Cornel and I teach because that is not a safe space…whatever your view is, that is going to be challenged,” said George, who has taught undergraduate seminar courses on development of Western intellectual thought with his friend and colleague at Princeton University since 2007.

"The only way we can have a hope of being on the right side is to think as critically and carefully as we can and engage with people who don’t see it the way we do."

Cosponsored by Biola University’s Torrey Honors Institute and Center for Christian Thought, “The Cost of Freedom: How Disagreement Makes Us Civil,” was held at the campus the evening of April 30 and streamed live online. Robert P. George is a noted natural rights theorist while Cornel West is known for his analysis of political and racial issues. Moderator Rick Warren is pastor of Saddleback Church and bestselling author of The Purpose Driven Life.

Both West and George agreed that the search for truth through civil discourse serves to bring people together, rather than drive them apart.

“When your common goal is getting to the truth and you are united in that enterprise, you’ve got something much stronger binding you together then whatever the disagreement is that separates you,” said George.

“The only way we can have a hope of being on the right side is to think as critically and carefully as we can and engage with people who don’t see it the way we do,” said George, with West adding that if students do not examine their assumptions and leave the university as a more developed person then they are wasting their parents money.

George stressed the value of listening to anyone who is willing to respectfully present their thoughts within the university context, particularly in those institutions established as nonsectarian forums for the engagement of ideas. He said that it is not the role of teachers to “make you comfortable and reinforce you.”

“We want the development of critical intelligence, not because there is no truth…it is precisely because if we are going to get to the truth of the matter we must—on any given issue—understand and appreciate the most compelling arguments to be made on both or all sides of the question. If we are not doing that we are not thinkers, we are ideologues- we are dogmatists,” said George.

George told the audience at the evangelical university that Christians have an obligation to “speak the truth in love” even in the face of severe criticism by those who do not hold the same beliefs.

“They want to tell us by rejecting the sin we are rejecting the sinner and we are all too often so intimidated or so unwilling to bear the consequences of truly loving…that we go silent or even capitulate. But that’s not love. What our obligation in most situations to do is say ‘no matter what you call me, no matter what the consequences are for me, I am going to speak the truth in love and I am going to speak the truth because I love you,’” said George.

George said to audience applause that, “if we are driven to a particular interpretation [of scripture] because that will get us in line with a secular cultural orthodoxy, then whatever that is, it’s not Christianity. It’s simply deforming the witness of the church to make it conform, so we can hang onto the consolations of Christian faith...without having to actually witness to the Christian faith, which is a scandal to the world and always has been.”

“I think that part of the problem has been, and this is where I want to defend my secular brothers and sisters,” began West in response, “that we needed the pluralizing and secularizing of public discourse because so much of the record of institutional religion has been one of intolerance if not outright persecution.”

“The trouble with our dear secular brothers and sisters…is that they are not proposing, in many cases, a secular and civil public square but rather the establishment of secularism as the governing public philosophy of the United States,” said George, who characterized modern secularism as a “pseudo-religion that competes with the great traditions of faith and other secular systems.”

Warren added that tolerance “used to mean I treat you with respect and dignity even if I totally disagree with you... today tolerance means, for a lot of people, all ideas are equally valid. Well, that’s nonsense.”

Both professors said that their professional and personal relationship has had an impact on their thought. West said that his “suspicion of big government has been deeply reinforced” due to his dialogues with George and expressed concern about the potential rise of an “American fascism, when you get big business, big banks controlling politicians and then you get big government coming together and keeping track of everybody.”

Though George said he believes that affirmative action at colleges is “inconsistent with the basic principle of equality,” he said that his opposition towards these policies has “softened” due to questions posed by West regarding Princeton University’s student population.

“Would our campus not be worse off by virtue of the effective absence of people from the black community? And if you think about the question, the answer is of course we would be worse off with that,” said George, who said he now recognizes that the issue is “much more complicated and difficult” than he had previously believed.

West touched on number of current events, including the recent riots in Baltimore.

“Somehow we have to make sure that the tears of the mothers of the daughters and sons who are shot and mistreated by the police have the same status as the tears of the police’s wives when the police are killed,” said West, who added that President Obama upset him with his response.

“So in that sense, let’s be broader in our conceptions, but by using that kind of language it becomes difficult to remain in contact with the humanity of the folks even when they are doing the wrong thing,” said West.

West said that he was concerned about a “corporate media that is able to transmit all kinds of lies about people with very little accountability because they have big money.” He used the terms “neo-liberal propaganda” and “milquetoast, spineless, Democrat” to describe MSNBC, and said “on Fox News you get a lot of mean-spirited Republicans.”

“The structure is one that if the moneyed interests are going to shape the very framework in which we engage in our discussion, then what happens to the culture?” said West.

George used the recent controversy over Indiana’s Religious Freedom Restoration Act to illustrate what he characterized as the power of big business and the mainstream media to shape the public discourse.

“The entire elite establishment came down on that law, depicting it in an entirely false light. Most Americans were led to believe that the law was a monstrous license for discrimination when it was absolutely nothing of the kind and yet the forces that knew that these were spectacular lies being told lacked the resources to actually get their message across,” said George, who added that the creation of the Internet has helped to counteract this problem to a certain extent.

“When there is a monopoly viewpoint, when there is an established cultural orthodoxy, and the major mediums of communication are with the program and not letting alternative arguments and alternative voices be heard we are in big trouble. We can congratulate ourselves…for being a culture that recognizes free speech, but only one side is being able to communicate,” said George.